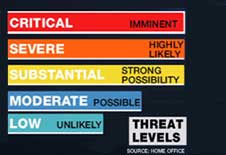 The UK Terror Threat has been raised to the second highest level of 'severe' meaning that an attack is 'highly likely' although rather confusingly the Home Secretary Alan Johnson said that there was no intelligence to suggest any attack was imminent.
A cynic may point to the security level being raised the day after Gordon Brown was strong armed into appearing at the Chillcott Enquiry as suspicious. Others seem to think that as the Labour Party have very little to crow about in the up-coming election, they are faking an imaginary terrorist incident so they can claim the credit for keeping us all safe.
This leaves us with two unsavoury thoughts. Three actually if you count that hardly anybody actually believed that a terrorist attack was highly likely in the first place. When you can't be sure that your leaders are telling the truth about it or not then they are a busted flush in terms of Governing.
First unsavoury thought is that the terrorists have won. They have us jumping through hoops and making more knee jerks than a chorus line doing the can-can. Two wars costing trillions, tens of millions spent on security, fighter jets on standby, political turmoil, travellers inconvenienced and a global Islamic demonisation and backlash.
If Al Queada never attacked again, just made a half hearted attempt every now and then, security would be still be cranked up and great expense in money and inconvenience and the paranoid and fear would continue.
Just by influencing so many changes in our lifestyles and the way we operate as a nation so dramatically, must mean that the Terrorists have won.
The other unsavoury thought is that we are all being played like a fiddle by opportunist politicians.
It's a win-win situation for them, we get attacked and there are the justifications for another war whether it's Iran, Iraq, Afghanistan, Yemen or the borders of Pakistan. We don't get attacked and they claim the praise for keeping us safe. All they have to do is create a climate of fear every so often, the sliding scale of the Terror Threat that can be moved up or down at a ministers whim and then send the tanks to Heathrow. The odd bust of a terrorist cell in a blaze of righteous glory and then hope that we don't notice when they are all embarrassingly released without charge weeks later as happened with Forest Gate, the Wood Green ricin plot and the students arrests in Manchester.
Identity cards, an explosion of CCTV, disruption of legal demonstrations and a massive surge in Government powers and obtrusiveness while we are persuaded that the loss of a few freedoms is the price we must pay for increased security.
One could be excused for thinking that the power hungry politicians can be thankful for Bin Laden and his cohorts for graciously providing the very excuses they were looking for.
Posted by Falling on a bruise at 21:53

Lucy, American politicians have found that the mere mention of the words 'terrorism' or 'terrorist' makes the average American easily controllable.

Such methods don't work in Australia because most Australians don't believe anything that politicians say anyway!

It always amuses me that a handful of motely, unintelligent, lightly-armed men who have explosives in their shoes or underpants, can be elevated by the spin doctors into a mighty force that threatens the very foundations of the world's greatest superpower (as it goes about its mission of seeking control of the world).

When are people going to wake up to the fact they are being conned?

This 'threat level' thing seems like total farce to me. Surely the most threatening terrorist attack will be the one that we don't have any clue about?

I don't usually read the Daily Mail, but I agree with this:

We've got a threat level system over here, but nobody pays attention to it. And like yours it has 5 different levels, but it's never gone below the third highest for obvious (and highly political) reasons. And y'all have an election coming up, which is another good reason to raise your threat level, for the government to remind y'all how much you need them.

I always find it really funny, because it's supposed to be like a weather forecast, but for terrorists. As if one could say "cloudy with a chance of anthrax".

And you Brits can only complain so much about your intrusive government. Your wonderful doctrine of "parliamentary supremacy" allows your parliament to do anything without restraint... unless your great queen finds herself to be the defender of liberty and starts vetoing things after 300 years.

You've got no checks or balances. There's nothing preventing the Commons from passing something like the Enabling Act of 1933.

Nog, the reign of George W. for eight years shows clearly that the U.S. has few checks and balances either!

Us having no say for the following 5 years after an election is over is just one of the many things i would change Nog. I'd have a mechanism that triggers a general election whenever the ruling party drops under a certain figure of support or at the least limit the time between elections to 2 or 3 years.

For once I (kinda) agree with David. The checks and balances thing, while great in theory, kinda goes out the window once you put the shits up the populace and a craven media plays along with it...