Getting what America owes us 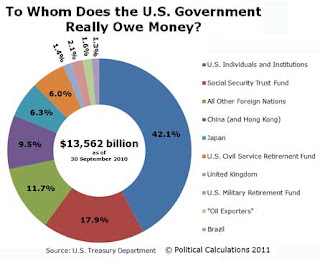 Times are tough and the Americans are tightening their belts along with the rest of us especially as their
Government owe out £13,562 billion. That's some serious money and the US Treasury Department helpfully tell us who America owe the money to.
The largest group waiting for their money back are the US Individuals and Institutions who account for over 40% of the debt.
China and Japan are the 4th and 5th in line but surprisingly there we sit in 9th place with America owing us 1.4% of the $13,5621 billion which roughly turns into a tad over £177 million.
Iceland owe us £2.3 billion and offered to pay its debt by providing us a steady stream of green electricity instead of cash but we said we wanted the cold hard cash instead.
Maybe this is a deal we could set up with America but instead of electricity, it could give us something else of the same value.
I have always quite liked the Statue of Liberty so can you wrap it in some of that bubble wrap so it doesn't get damaged and have it here by the weekend. And if you can give it a bit of a scrub first, much appreciated.

Maybe just a typo but it's 177 billion not million. Don't be so soft on us.

And y'all owe a lot to foreigners yourselves (although ours to y'all could probably cover y'all's to everyone else).

Too many countries rely too heavily on unsustainable trade and borrowing relations with the US. It's a vicious cycle and it will hurt everyone in the long run.

If the US went broke, every exporter would go broke to. If we can't keep buying, everyone else can't keep selling. And all of those dollars and dollar-denominated debts are only good for buying things from people who want dollars (Americans). So if we go broke, everyone else is also ruined even if we pay everyone back and there's enough valuable stuff to buy with those American dollars because so much of the world economy is based around exporting to the United States.

Take the car industry. We import all sorts of European and Japanese cars (that are full of Indian and Chinese parts). Even a Europe and Japan that is twice as rich isn't going to make up the lost export market with increased domestic demand for those cars and parts. Look at other industries. How many Barettas do Italians buy? How many 120mm smoothbore Rheinmetall cannons do Germans need for their tanks? How much of BPs oil is consumed in Britain? How many Norwegians use the Opera web browser?

If imperial America went down and took capitalism with it, the world would be a much better place.

Of course, the Plutocrats and the Oligarchs would go down as well (sniff, sniff...sob)!

And the corporate-bought politicians might also become an endangered species (holds his hands in a prayerful gesture).

You are right nog, its 177 billion, not million. I was doing us out of a few quid there. Maybe we can take the Golden Gate Bridge as well then.

I don't know if Australia owe us anything David but apart from the Opera House, i'm not sure what else we would take from you in payment.

If we owe you guys anything we offer you our monarchy and their palaces/castles.

how about this. we'll make yawl last on our list of nuclear targets... except for israel of course.

Hearing about your economy you may have to sell your nukes. I hear Iran is in the market.

i think we might "give" iran a nuke or two if they aren't careful...

i think we might "give" iran a nuke or two if they aren't careful...