Solutions To Peace In Gaza 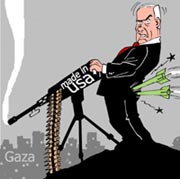 Of course it is great news that the ceasefire in Gaza is holding but we have been here before haven't we?
Israel pulverises Gaza and then after international pressure a ceasefire comes about and we hear big noises about peace before it all breaks down and once again the Israelis are running from missiles coming from the Palestinians side and Palestinians are digging their relatives out of the rubble of their houses.
A cynic may say that neither side wants peace as both Governments use the other as the reason they should be elected, to keep their own people safe from the barbarians on the other side of the wall.
This has gone on for decades and will continue all the time that the Palestinians are criticised more heavily when they fire rockets into Israel than Israel who are an occupying army illegally seizing and building settlements on Palestinian land, defying UN resolutions, killing Hamas politicians, holding over 9000 Palestinians in its prisons, destroys farms, bulldozes homes and businesses and maintaining a monstrous wall deemed illegal by the international court of justice amongst numerous other violations.
There are only two solutions that will bring about peace and stop this cycle of violence.
The first is that America stop bankrolling Israel, especially its military. It could not maintain such a large military presence without US help, so it would have to make peace with its neighbour or it would be bankrupt.
The second solution is for Israel to finally agree to a Palestine state.
The problem with the first is the American religious voters who would not stand for America cutting Israel loose.
The second is if Palestine became a country and a UN member then it will be under the protection of UN and international law and more importantly the International Criminal Court where it could take up the legal case against Israel for war crimes and challenge the settlement building in the occupied territories.
Netanyahu shared what vision he had for a state of Palestine in his 2009 speech where he envisioned a state which would be 'without an army, without control of its airspace and obviously, the Palestinians will not be able to forge military pacts'.
Netanyahu's Palestinian state would be defenceless, have no sovereignty, and hand control of its geographical space over to its decades long oppressor.
Hamas are not good for the Palestinians and they should be rightly berated for firing missiles into Israel but the vast majority of the problems are due to Israel and its abhorrent treatment of the Palestinians and until Netanhyahu is replaced, Israel stops military incursions into Palestine, lift the blockade, stops stealing Palestinian land and remove the wall that acts as an open air prison to 1/7 million Gazans, we will be watching this scenario repeating itself over and over again just like it has been for the past 60 years.
Posted by Falling on a bruise at 21:06

The U.S. wants Greater Israel to come to fruition, Lucy, so it can get on with its warmongering Allies like Australia and Britain in its quest to control the world.

Greater Israel would control the Arab region and all that oil! In the small minds of the U.S. and Israel, the Palestinians are completely incidental and they'd gas all of them if they thought they could get away with it.

P.S. Would you advise Q and Cheezy to eat 1 kg of chocolate per day. It might add a few points to their collective I.Q.!

Dear oh dear... Is that considered witty repartee in your local playground, David?

In that same spirit then:

-Boo sucks to you, farty-breath.
-I know you are, but what am I?
-You smell funny, poopy-pants.
-Who cuts your hair? Stevie Wonder?
-Seeya, wouldn't wanna be ya.

From the Israeli Deputy Foreign Minister - most of the people that were hit in Gaza deserved it.

That's the calibre of the people the Gazans have to deal with.

first, the history books tell us the jews and arabs have been fighting since before the pyramids. but now it just takes 2 things for peace... bah.

the "american religious voters" comment is inane. the far right are the religious ones. the far left are the atheists and they just re-won the presidency.

haven't you been watching the news? it was recently revealed that the US has more oil than the whole middle east...

the oil thing was lame 10 years ago and it is more lame now.

ps - you might take your own advice in re chocolate

Funny that the two things that would make the biggest change but would least benefit Israel but most benefit the Palestinians haven't been tried isn't it. Why you think that is?

You have been listening to Fox News again if you consider Obama to be a far left atheist.


lucy, i really don't have a good knowledge of modern middle east history but i dont think palestine was ever a state. Of course, Israel was, then wasn’t for almost 2000 years…

regardless, the usa doesn't care about israel or palestine. the usa cares about its own interests (isn't that obvious with egypt, syria, libya)?

israel is easier for us to deal with and is less likely to turn on us like egypt, syria, and libya.

concerning obama, if one observes his actions (without the now seemingly mandatory reporter commentary) one can draw their own conclusions. don't listen to his words - they are complete bullshit for the stupid (the 47%, college professors, unions, hollywood, and the news media).

i'm not sure if he is an atheist, muslim, or christian. he plays the game very well...

No sensible or rational Israeli would ever consider this proposal.

Q- Do you have any evidence that Obama has ever evinced a belief in, or commitment to, any other religion than Christianity? I'm pretty sure none exists.

There seems to be a weird kinda McCarthyism at work here, where people are incredibly suspicious of Obama's roots. The 'birthers' are the most extreme example of these people, but it's not only these whackjobs who have had their doubts raised. It's otherwise sensible people.

Quite bizarre, considering that in the recent election the other guy was on record as taking his weird faith very seriously, and doing really f&cked-up things on the back of it. This stuff apparently wasn't much of an issue, whereas Obama's middle name was.

i already said i don't know. anybody can say they are any religion. he claims christianity. im not convinced he belives in anything.

in the usa people don't care about the losers. i dont understand why you make any mention of the loser... he lost.

That seems a bit harsh, mate... I hope for their sake that the GOP are thinking and talking about Romney. They need to work out how/why he lost.

I see what you mean about Obama. He may or may not be a 'true' believer. But he knows damn well that he'd better be thought of as some type of Christian (by at least a decent majority of people) or he would never have ascended to his current high office.

Anyway, I'm pretty certain he won't let any sort of 'faith' get in the way of his pursuit of the most rational decision. Admittedly, many other things may thwart this pursuit - but at least this won't.

the truth isn't harsh. maybe the way i stated it is harsh. personally, i prefer directness. if one thinks i'm a liar then i prefer they call out the lie don't use trash like "intellectually dishonest" or some other wimpy phrase.

i don't think an american president has ever been constrained by faith. i think many have used it as a rationale for their actions or inactions...

I think not speaking of somebody because he lost something is rather harsh. Even if you just say "Hey, there's that loser", surely that should be OK.

you are more gentle than i.

all of the US presidents claim/claimed to be devout christians.

it affected their views.

it affected their decisions.

it did not stop the expansion west into the indian nations.

it did not stop the invasion of mexico, greneda, honduras, spain, or cuba.

it did not stop slavery.

it did not stop the enternment of japanese americans.

it did not stop the use of the a bomb.

it did not stop JFK from trying to murder castro.

it did not stop JFK from having sexual affairs.

it did not stop LBJ from invading vietnam. i've been to the church he attended. went to the same university too.

it did not stop the use of drones.

it has not closed gitmo.

how is w different than any of the others from this viewpoint?