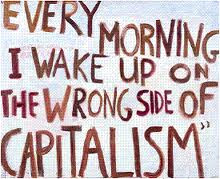 All in this together i think the phrase was when the Conservatives were being savaged for their unfair austerity measures and now British Gas have whacked up the price of gas by 18%, and electricity by 16%.
Due to the rising cost of what they have to pay said the company, the same company that made a profit £742m in 2010, up 24%.
What about the elderly, poor and the vulnerable was the cry but of course they're commercial enterprises and their job is to make money for their shareholders, not provide cheap energy for their customers. Think that the reason the price increases start in September just in time for Winter is a coincidence?
We could look towards the Government for help as they are the only people who can do anything about it as the utility companies have us over a barrel, the choice is pay it or freeze to death.
Alas the Government cut the Winter fuel payments which helped the elderly pay for their heating in the last Budget so looks like we are on our own.
All we can do is switch supplier, but they all follow each other and all quickly raise their prices in line so no matter where you go, you will be facing a huge price hike.
So the utility companies will not be re-nationalised, or the Government passing legislation to limit the profits they're allowed to make so all we can do is make a concerted effort to hit their profits by boycotting one of the 5 energy companies then watch them panic when their share price drops. That would concentrate the mind of the other suppliers who would be afraid of them being next.
Of course we won't do that, we will moan about it and then sit back and take it and the suppliers know that which is why they can take us for such mugs.
Yet another example of why capitalism doesn't work. Sheer greed at the top but all the time we have Governments running things who are prepared to protect the unjust and unfair system that we have, the rich will always get richer and the poorest will always be stuffed.
Posted by Falling on a bruise at 14:31

Great post, Hanz! It's time that capitalism was exposed for the gigantic con that it is.

Right across the world people are exploited by it while the rich 10% get ever richer!

Once royalty screwed the world. Now Oligarchs and Plutocrats do it!

Thanks David. It is a gigantic con but there are 3 reasons i see why they get away with it. Firstly the people who are running things like it so it won't be changed, secondly we are told it great and the alternative is terrible so we go along and thirdly we moan and groan but do nothing about it although if we got our act together, we could use capitalism against those who are screwing us and just in it for profit to make it fairer.

I was chatting about the winter fuel situation with my better half only yesterday, mulling over the extra we'll have to pay (we're currently British Gas customers)... She mentioned that Tesco and Sainsburys have now gotten into the gas/lecky business... Now, why am I not reassured by this?

Or, in other words, this.

Ha ha, loved that Cheezy. There are so many other people we could burn as well. Bankers, news of the world journalists, anyone who uses the word 'whom' in conversation. The list is endless.

-Have ever given the short explanation of "geographic monopoly" before? Surely I've put it in one or two of my long-winded comments over the years. Basically, with some things like roads and utilities, it can be hard if not impossible to have two competitors in an area. Because of this, the one provider of services will have a monopoly and may be able to charge exorbitant monopolistic prices.
-So privately-owned utilities can have the worst features of public and private entities. They have government-enforced monopolies, and they milk them with the efficiency of a business. They're exactly the sort of thing that economists since Smith have been fighting against.


-Rarely am I more annoyed than when I hear some government entrepreneur talking about how stopping him from looting his government-controlled market is something that he should be allowed to do because of "free trade." Nonsense!
-A "private" utility that exists by virtue of its government created monopoly should not have the same rights and freedoms in pricing and supply as, let's say, competing tomato growers. If you don't like one's tomatoes, you buy another's. But with utilities, it's often go without lights or water or pay the one or two providers in town.

capitalism doesnt work for people that are too lazy to do anything but whine...

Capitalism doesn't seem to be working very well for the the Greeks, the Portugese, the Irish or the Italians. All lazy as well as the 3m unemployed in my country, the 14m in your country and the owners of the 36,300 homes repossed here last year. All too lazy to do anything but whine but i don't know them so i can't count them. All lazy buggers though.

I reckon that anyone who hasn't made a couple of million bucks by 40 should be put down.

That would ensure that capitalist-loving humans would run the world and wouldn't have to mix with inferior types who just weren't greedy enough or unscrupulous enough!

Capitalists should inherit the earth. Just ask them!

ok you two, show me where anythings else is as good or better. i hope you say something stupid like cuba or china...

Does that count as good or better? The saying something stupid ball is now back on your side of the court.

its easy to grow when 90% of your people live below the poverty level and the capitalists have moved their manf to your country for cheap labor...

I would suggest the 90% living below the poverty level to our Government but i see they are already on it.