It's Goodnight From Me & Hello From Him

I started blogging in 2005 on Lucy's View before moving to Falling On A Bruise in 2007 and i have enjoyed writing every one of the 1000+ posts that i have committed to the Internet on both of these sites.
The most enjoyable part was the chance to interact with many people from many different backgrounds, nationalities and ideologies. We may not have always agreed but i have relished the rough and tumble as we threw our ideological ideas at each other in the comments section.
Blogging takes a surprising amount of time to do properly and i have not been able to dedicate the time needed to this blog for quite some time so i have asked a good friend who ran the excellent 23:59 blog and was dislillusioned with wordpress if he fancied taking it over. I hated the idea of just leaving it to rot after so long.
He agreed and you will find the name Hanz at the bottom of the posts from now on instead of mine.
I would like to thank everyone who has ever visited this blog, and special thanks to those who stuck around for the duration, to either agree or to point out why my musings were so wrong. All comments were appreciated and regardless of how you received my tree hugging, hippy nonsense, i sincerely wish you all the best and leave you with a heartfelt quote from two of our finest philosophers: 'Be excellent to each other.' Bill & Ted. 1989.
Posted by Falling on a bruise at 22:00 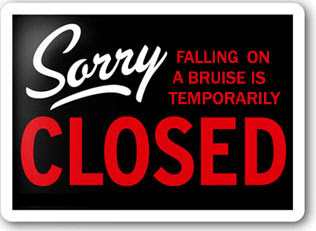 Today is Saint Patrick's day and legend has it that he banished all the snakes from Ireland. Not sure what else he did but the Irish have chosen a glorified pest controller as their patron saint and we should respect it.
We should also respect their choice to celebrate the day wearing a big foam top hat shaped as a pint of Guinness, holding a pint of Guinness in each giant Guinness-sponsored foam mitt and spilling both pints of Guinness down the front of their Guinness St Patrick's Day T-shirt.
Saint Patrick's day seems to be celebrated with much more vigor in America than over here where we show a few Father Ted's and avoid mentioning the potato famine or Bloody Sunday.
With American television being full of celebrating Irishmen and the temptation of many Americans to purchase an Irishman , as the countries closest neighbour, we are best placed to pass on some valuable information on the proper use and care of your Irishman

It is highly recommended that you store your Irishman in a cool, moist space, and DO NOT EXPOSE TO SUNLIGHT. If exposed to sunlight, very bright red discoloration is normal.

If your Irishman experiences trembling, loss of appetite and general unpleasantness, administer liberal amounts of Guinness, Jameson's or Beamish.

You should not use your Irishman if you are in possession of a fertile womb. Improper use may cause severe multiple pregnancies.

Consult your doctor before using an Irishman. Prolonged exposure to an Irishman may cause severe ear-ache about how that Thierry Henry handball cheated them out of the World Cup.

Never combine an Irishman with an Englishman, may cause broken teeth.

We hope that your Irishman brings you many years of enjoyment but if you have any concerns, consult a barman.

What Obama Should Learn From Ike

With Israel once again doing it's level best to snuff out any chance of peace talks with the Palestinians before they even begin, President Obama should be looking back to another American President on how to deal with an Israeli Government literally getting away with murder.
Dwight D. Eisenhower faced a similar predicament half-century ago when Israel colluded with Britain and France to launch an attack on Egypt. Israeli forces quickly seized the Gaza Strip while the British and the French took over the Suez Canal.
Rather than go through the motions of the President jumping through hoops to justify Israel's action as we have become accustomed to from American Presidents, Eisenhower condemned the attack. At the United Nations, the U.S. joined the Soviets in taking the matter to the General Assembly and approving resolution after resolution calling for a ceasefire and withdrawal of the French, British and Israeli aggressors.
The British and French immediately began pulling out their troops but Israeli Prime Minister David Ben Gurion adamantly refused to give up the Gaza Strip despite a sixth UN resolution calling for withdrawal.
Eisenhower told Ben Gurion he demanded 'prompt and unconditional withdrawal' from Gaza. Ben Gurion again refused.
At that point, instead of an Obama-style cave-in, Ike decided to take the gloves off. He informed Ben Gurion that he would support a UN call for sanctions against Israel which would effectively stop U.S. government aid to Israel. To prove he meant it, the president went on national television and told the American people that 'We are now faced with a fateful moment as the result of the failure of Israel to withdraw its forces behind the Armistice lines, as contemplated by the United Nations Resolutions on this subject. I would, I feel, be untrue to the standards of the high office to which you have chosen me, if I were to lend the influence of the United States to the proposition that a nation which invades another should be permitted to exact conditions for withdrawal'.
Ben Gurion's initial response was continued defiance, but with no indication that Eisenhower would back down, and the General Assembly about to vote for sanctions, he capitulated and withdrew Israeli troops from Gaza, although spitefully destroying all surface roads, railway tracks, and telephone lines in the area, as well as several villages on the way out.
Of course the Middle East today is very different but the lesson of 1956 remain relevant today that on the rare occasions when U.S. leaders have the guts to stand up to the bluster of Israel, to insist on respect for the United Nations and international law, to take their case to the American people and the world, and to back up their demands with the threat of economic sanctions, even the most conceited and warmongering Israeli government has no choice but to cave in.
If Obama would only learn that lesson, he might yet be able to achieve the lofty goals he set out to bring peace to the Middle East.
Posted by Falling on a bruise at 22:15 1 comment:

I received two texts today, both telling me Jon Venables new name and his latest crime.
Fortunately, i half remembered the name 'David Calvert' as the same one that was wrongly 'outed' as Jon Venables five years ago.
It seems that once again his name is being excitedly texted to mobiles and posted all over the Internet again which must fill the real Mr David Calvert with dread.
Being a scouser of the same age as Venables, some people took it upon themselves back then to threaten and abuse him and his family and vandalise their home in Fleetwood until he went to the newspapers armed with his photo album and they printed pictures of him aged 10 and through his teens which convinced even the most hardest of thinking of his growing lynch mob that he was not who they thought he was.
Now it seems that the panic button the police installed in his family home may need to be activated again because he name is being wrongly 'outed' again.
If you receive a text, email, tweet or read on a blog post that David Calvert is Jon Venables, he wasn't five years ago and still isn't now.
Posted by Falling on a bruise at 21:31 6 comments:

Peter Sutcliffe, the Yorkshire Ripper, killed 13 women and attacked five others after claiming to have heard voices ordering him to kill prostitutes. In 1981 he was sentenced to a minimum of 30 years in prison and was placed in Broadmoor Hospital, a prison for the criminally insane, after a diagnosis of schizophrenia.
This week his lawyers won a ruling from a high court judge that a hearing should be held to set the length of time he should serve before being eligible for parole armed with the ringing endorsement from the hospital doctors that Sutcliffe is fit to be freed from Broadmoor and 'is effectively cured as long as he never stops taking his medication.'
The decision leads us to an uncomfortable appraisal of just what we expect from our prison system.
When a judge sentences a members of society who break the laws of the land to be jailed, is it as punishment, in order to be rehabilitated or just as a place to send them to remove them from Society for a length of time?
Is the 15 to 30 years of a life sentence the amount of time a judge considers long enough for a criminal to 'repay his debt to society' or is the thinking that this is the amount of time that a certain prisoner would take until he is suitably ready to rejoin Society and not be a liability?
If you see prison as a punishment or a rehabilitation centre, then at some point we are going to face the same decisions as we do now with Peter Sutcliffe who has almost served the minimum period and who doctors say is 'cured' of the illness that made him a killer.
If we see prisons as a place to hold the unsavoury members of society until they are deemed fit to rejoin the rest of us, then we still face the same problems when the time imposed is up.
There are advocates of restoring the death penalty and i would strongly suggest that if there were a referendum on the subject in Britain, hanging would be quickly restored to the list of possible punishments which explains why we would never be given the opportunity to vote on it.
As two thirds of prisoners re-offend once released, we are blatantly not rehabilitating prisoners correctly or enough. The punishment is obviously not severe enough to act as a deterrent and it shows we can only remove them for a short time but at some point we have to cross our fingers and put them back into the mix again.
I don't know a solution but i am very uncomfortable with the idea of releasing anytime soon a man who is only a missed dose of medication away from returning to his old murderous ways.
Posted by Falling on a bruise at 19:04 7 comments: