Anarchy, The Only Way To Be 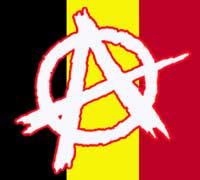 If you travel up from France and take a right at Calais, you end up in Belgium or to give the country it's full name, 'that place that nobody can name 3 famous people that hail from it without resorting to Google'.
Belgium has always been a bit of a strange country, known as boring and flat, it gained it's independence from the Dutch after an uprising followed an opera which is not the most obvious of sparks but it literally was over for the Dutch when the fat lady sung.
Thanks to stubborn politicians refusing to agree on how to form a coalition, Belgium had been without a government since June 2010 and in a state of anarchy in the original meaning of no government.
No government!? Well then there has obviously been massive riots, chaos, lawlessness, buildings on fire, or any of the other apocalyptic scare scenarios of a state of anarchy, only there hasn't been.
Daily life continued almost the same as before with everything still functioning except with one notable exception.
Without a government, none of the stuff all the other governments around the World have been doing could go on so no cuts, redundancies or austerity packages. In the absence of anyone with a mandate to slash and burn, Belgian public sector spending is tootling along much as it always has and much to everyones surprise, the Belgian economy is experiencing slightly healthier growth than most of it's European neighbours.
In the second quarter of 2011, Belgium grew at a meagre 0.7% but that beats the 0.1% growth for Germany, 0.2% for Britain and the disastrous 0.0% for France.
The country appears to be benefiting from its accidental immunity to the austerity fever that’s sweeping Europe so from the economic point of view, a country with no government is doing better than those with a government.
Alas, the heady times of Anarchy have now come to an end as the Belgian politicians have finally sorted out their difference and from today a Belgian Prime Minister has his hands back on the rudder again but boring little Belgium has left us with an interesting thought that won't be promoted by any Government anytime soon.
During hard times, could the best form of Government be no Government at all? Johnny Rotten may have been onto something all those years ago.
Posted by Falling on a bruise at 20:02

You're using equivocal definitions of "government." Belgium has all sorts of government including a central government and an executive administration.

government is a necessary evil...

It isn't misleading to say they have not had a government, because they haven't. They may have had the layers beneath a Government but they did not have a decision making Government in the sense that we can call it such.

First, I generally agree with the proposition that the best government often comes out of "gridlock." I'd argue that the best (least bad) era of the US government in my lifetime was when Newt Gingrich was Speaker of the House and Bill Clinton was President. There was economic growth and a budget surplus.


However, the notion of "government", I guess in the sense of a parliamentary government supported by a solid majority of the parliament, is nonexistent in much of the world, including the United States.

In America, the President is an Emperor and the Congress-members are controlled by Corporations, Israel, and the Pentagon.

That is the reality and all the talk about 'Government by the people, for the people' is a complete nonsense!

I think we are getting confused with the meaning of Government, or my idea of a Government anyway, as in someone who makes the decisions. What Belgium had was nobody deciding anything, it just carried on at a time when everyone else was making cuts and making redundancies because there was nobody there to make these decisions. Will be interesting to see if the new man coming in makes the cuts same as everyone else or thinks what we have is workiong so lets just stay as we are.

government can be anything you want it to be...

to the rest of the world it is the mechanism that creates and enforces controls for a group of people. it can be imposed on the people or picked by the people.