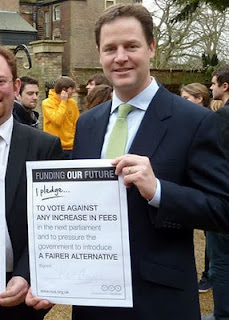 Pictured left is Nick Clegg, leader of the Liberal Democrats. In his hands is a pledge that if his party got into power, they would 'vote against any increase in fees in the next parliament and to pressure the government to introduce a fairer alternative system'.
Today, Nick Clegg, still leader of the Liberal Democrats and now also Deputy Prime Minister and a senior member of the coalition Government that voted to increase University tuition fees threefold to £9,000. Clegg was a vocal advocate of the controversial decision, urging his party members to support the hike.
Mr Clegg and his party targeted university campuses seeking student votes ahead of the General Election and students voted for them in large swathes to give them seats in University towns such as Cambridge, Norwich, Portsmouth, Manchester and Bath.
It was one of the cornerstones of their electoral campaign, a gold-plated, copper­bottomed promise and this is why students are protesting today.
Not only will they be saddled with tens of thousands of pounds debt before they even set foot on the career ladder, (and don't be fooled by the argument that graduates will pay less than at present, they will just be paying it over a longer period) but they were lied to.
A bold, plain old fashioned fib and that is why the Liberal Democrats face an almost certain wipe out at the next election.
You cannot tell such lies and not expect the electorate to swallow it quietly, especially when you treat so dishonestly the very same people who voted you in, as the 21 who voted against the raise know and the 28 who voted with the Government will soon find out.
Posted by Falling on a bruise at 20:32

I think this coalition has been conceived in an entirely stupid way. In a nutshell, I don’t think that Lib Dem MPs should be obliged to say that every single government initiative is a great idea, the way that Nick Clegg seems to think they should.

For a start, the public knows that when they do this, some of the time they will be lying. And we’ll hate them for it.

Likewise, the discrete Lib Dem initiatives that pass through the legislation process – if indeed there are any – should not require Tory MPs (or even cabinet members) to speak up in favour of them.

It should just be accepted in a coalition that not everything that passes is going to receive universal agreement from all of the government. However, MPs will nevertheless vote for legislation that they personally don’t like, in order to keep the government viable. This sort of whip should usually achieve a workable voting majority in the house for all matters of confidence and supply.

However, when MPs step outside the House of Commons they can honestly say that they don’t agree with the new bill/act/whatever, and they’ll now work to achieve a better solution in the future. This, to me, seems like a more mature way for a coalition to work.

The current way is making them look like idiots and – you’re absolutely right – will only serve to decimate the Lib-Dems at the next election.

I had the opportunity, in a workplace setting yesterday, to say that corporations have become more powerful than our governments. Nobody blinked an eye.

FDR put it well when he said:

"The liberty of a democracy is not safe if the people tolerate the growth of private power to a point where it becomes stronger than their democratic state itself. That, in its essence, is fascism - ownership of government by an individual, by a group, or any controlling private power." - Franklin D. Roosevelt

I know this would make anarchists bristle, but before we give up the state, we need to put private, commercial power under our collective thumbs.

Somehow, I know this relates to budget cuts for education while banks are bailed out and the banking class gets richer. 25% of Obama's tax capitulation with the Republicans will go to the top 1% of Americans. Ain't Amerka great!?

I was one of those who naively thought the Lib Dems would water down the more conservative like ideas of the Conservatives. Never did i think they would be quite so gung ho over backing the Tory agenda. It is as if they are so afraid of the coalition falling apart and losing the taste of power that just buckle under.

GDAEman - I always thought that big business and rich individuals funding Presidential campaigns is amazingly stupid. They don't hand over millions because they like a candidate, they want and expect the favour to be returned. I trust big corporations as far as i could throw a well fed banker.