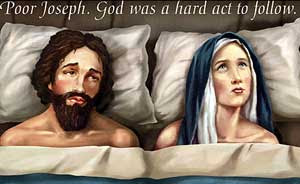 I always felt a bit sorry for Joseph. He was an older man with a teenage girlfriend who had just told him that while he was out, God had came down from heaven and impregnated her with man's Saviour.
Luckily for Mary, she was shacked up with probably the only man in the history of mankind who went "I'm okay with that' and then went about hiring a donkey to take his wife to Bethlehem. The donkey salesman probably told him it was a baby stallion. If he was around today he would probably be excitedly replying to emails from Nigerian Colonels requesting his bank details.
Now he is suffering again at the hands of the New Zealand church with the poster depicting him in bed with his wife Mary while his wife dreamily thinks back to her former lover.
Not one to have a sense of humour over these things, the Catholics are having a moan.
"Our Christian tradition of 2,000 years is that Mary remains a virgin and that Jesus is the son of God, not Joseph," she told the New Zealand Herald. Rub it in the poor blokes face why don't you.
It does make you wonder why God chose a teenage girl, unmarried, a virgin and in a relationship to aim his holy ejaculation at. There must have been plenty of other women he could of got in the family way and not caused a rumpus. Did he get her permission first?
God moves in mysterious ways and judging by that look in Josephs eyes, he knows that a half bottle of wine and the Roman soldiers uniform just wasn't going to cut it anymore.
Posted by Falling on a bruise at 22:17

That people still believe in the nonsense that all religion is never ceases to amaze me, Lucy.

I mean, back in time, when science was limited and superstition rife, it was understandable. Religion seemed to give some answers, give the ignorant something to hang their hats on, give them a false hope that they wouldn't really die.

But we live in 2009! There is not a shred of evidence to support the existence of any god or any life after death!

Your post is excellent and very witty. It shows how silly and divisive the whole religion thing is, what a con it is.

Why can't people accept the reality of what life is? The world would be a better place if they did!

I don't know how people can make that leap of faith either David, religion has just never appealed to me and when i see some of the things that get done in its name i agree with you.

the farce is humans basking in the glory of their own "thinking"...

i was an athesist until the age of 45 and thought many of the thoughts that you and david share (though i didn't impune people that believed, unlike many of today's atheists that seem to feel driven to insult believers) when i realised that just because we can't "prove something scientifically" doesn't mean it doesn't exist. gravity for example, we don't know what it is yet we must deal with it.

what humans know might fill a thimble. what we don't know could fill an ocean. every time we learn something using our "scientific prowess" the number of unanswered questions INCREASES...

Lucy, on television, I often see American troops praying before they go out on a mission. They have a chaplain there leading proceedings.

After prayers are over they go out and murder civilians, kids, what does it matter?

These men and women profess to be Christians and they come from one of the most 'Christian' nations on earth. Yeah!

Christianity, like other religions, is supposed to be about 'love thy neighbour' and 'thou shalt not kill, etc'

How come this so-called 'Christian' nation is up to its ears in endless warmongering, killing, invasions and occupation, and blatant imperialism?

I thought Jesus was a man of peace!

The American troops pray to God to help them while the Islamists do the same to the same God. Wonder whose side he is on then?