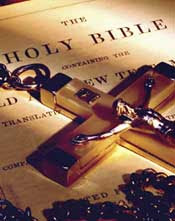 Religion plays no part in my life or in the lives of the wide majority of Brits in general but God and his kin seemed to have a renaissance period during the 2000's.
It always seemed to hold sway with most of the Middle East and with large swathes of people in America but with the introduction of George W Bush to the Presidential seat in 2000, religion made a comeback.
To my ears it always sounds strange hearing a leader mentioning God in his addresses and Blair successfully managed to hide his faith from the public for a long time but when it was revealed, he was roundly mocked as a religious nutter.
The zenith seemed to be when George Bush told Mahmoud Abbas "God told me to strike at Al Qaida and I struck them, and then he instructed me to strike at Saddam, which I did, and now I am determined to solve the problem in the Middle East'.
With Al Qaida claiming the same God telling them to declare Holy War against the West, it became very confusing to work out whose team he was on as both claimed they were carrying out his wishes.
Islam was thrust into the spotlight after the World Trade Towers attack and the Koran was dissected by Westerners looking for proof of its evil intentions. Muslims, regardless of their beliefs, were all tarred with the same brush and widely vilified while attacks on Jews increased with Israels actions in Lebanon and Palestine throughout the decade.
Christians and Muslims seemed to be at loggerheads with both accusing the other of atrocities, the Iraq and Afghanistan war seen by the residents in those areas as a modern day crusade.
The idea of Intelligent Design was offered up as was Scientology with its idea that souls reincarnate and have lived on other planets before living on Earth.
Because of the brief resurgence of religion and the 150th Anniversary of Charles Darwin 'Origin of Species', high profile Atheists stepped up to proclaim the demise of God with increasing assertiveness. Best selling books from authors such as Richard Dawkins and Christopher Hitchens stuck the boot in even harder as did the Atheist bus campaign that told us that there's probably no God now stop worrying and enjoy your life.
Religious intolerance from all sides raged throughout the 2000's and with fatal consequences in many cases which seems to keep it on the trajectory of religion being hijacked by fundamentalists and proving to be the problem and not the cure.
Posted by Falling on a bruise at 23:49

Religion is a beautiful thing which brings comfort to millions.

I cringe when i hear people like George Bush and Bin Laden using G-d to justify their warped actions. Religion is about love and reaching out to each other, not killing each other.

Ayone who can take G-d and say that they are doing his work with high explosives and missiles are deluding themselves. G-d is love and would never condone such behaviour.

I hope that when you are ready, you will embrace G-d Lucy.

Religion is a beautiful thing! Yeah!

We saw its beauty when Jewish Israelis bombed Gaza. 400 kids died. And when two Irish Bishops resigned over child molestation.

We see it daily when 'Christian' America uses it bombs and missiles against civilians. We see it when the 'Rapturists' demand the use of nukes so they can go to 'heaven' without dying.

We see it in the conflict between India and Pakistan, and between, for centuries, Muslims and
Christians. And who can forget the Crusades?

And, of course, there was the Spanish Inquisition when unbelievers were subjected to hideous tortures by the Roman Catholic Men of God.

Religion is an evil, profitable, divisive con that sucks in the gullible and the superstitious.

It has no place in the 21st century!

Daniel says "And, of course, there was the Spanish Inquisition". OF course we remember the Inquisition, here is a snippet

Certainly in the US, there is a battle shaping up between two widely divergent views of what this country stands for. With the media egging both sides on, I fear that there is no resolution that will allow the citizens of the US to live together peacefully.

Maybe time to get out.