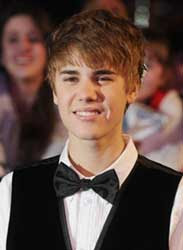 Come with me back to the early 1980s. It's Thursday evening and sat on the sofa's in living rooms all across the land are legions of young girls, just entering their teens, waiting excitedly as the Top of the Pops presenter counts down through the charts and people like Human League, Bucks Fizz and Shakin' Stevens until finally millions of teenage hearts leap and the face of Simon Le Bon fills our TV screens.
Fast forward 25 years and Simon Le Bon is still squeezing into those tight trousers but he has long been replaced as the face that teenage girls scream at and now it is the turn of a 16 year old Canadian with silly hair.
They are calling it Bieber fever and he has already written an autobiography, had worldwide hits and has a movie under his belt when other young boys his age are more concerned with completing Bioshock 2.
I have seen and read a few interviews and he has come across as a nice enough boy and he avoided the Miley Cyrus career suicide move of coming across as a spoilt, pretentious little snot. If ever a teenager needed to be left on a desert island somewhere and forgotten it was her.
What Bieber has got going for him is the way he has not been spewed out by the Cowell production line or coached in the sickly sweet Disney template, he is a product of the new media and was actually 'discovered' by music executives.
The career of a teenage heart-throb is short lived and i expect his posters will be replaced by someone else on bedroom walls around the world this time next year but i refuse to join in the sneering by my fellow adults.
He seems nice enough and although his songs are not my cup of tea, he isn't doing anybody any harm so we should leave him alone and remember that our generation produced people like Phil Collins, Shane MacGowan and George Michael so we have nothing to sneer about. Okay, maybe we can sneer at the silly haircut and his liking of wearing bow ties.
Posted by Falling on a bruise at 10:13

I read something about him the other day... he was asked about abortion (cruel, huh? but still..) and he opined that he thought that even rape victims should be forced - by law - to bear the child. He said this with a shrug and a cheery "Everything happens for a reason!"... so I'm going to respectfully disagree with verdict of "nice enough boy".

I know he's only young, but most people aren't a closet-fascist/lover-of-the government-jackboot when they're 16... Old enough to know better, really.

Ouch..i didn't read that interview. I did read that he was deeply religious which is maybe where his viewpoint is coming from. Was there any reason why he spouted this view?

He was just asked the question, "what do you think of abortion?", I believe.

Just google his name + abortion and you'll find the debate. Some of these sites now seem to be saying that he was misquoted and he was really just thinking aloud, and it looked a lot worse in print... which I guess is what you'd expect of his PR people following such an incident... But still... he's only 16 so let's cut the little Hitler Youth dweeb some slack.

Now I find this thought very disagreeable. Way to make me a virgin until I'm about 30, Justin!