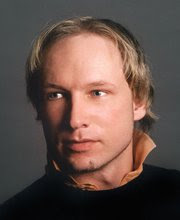 Like most people, the moment the Norwegian mass killer was named as Anders Behring Breivik, the first thing i did was look him up on facebook.
A Director of Breivik Geofarm with qualifications in micro and macro finance and holding Conservative political views, he lists political analysis as one of his interests and his favourite books are 1984, On Liberty and The Trial. He also lists hunting as a pastime.
The reports are that the attacks were politically motivated and judging by his facebook profile, he does seem a political person.
Anders also had a twitter page here with just one tweet on the 17 July stating 'One person with a belief is equal to the force of 100 000 who have only interests.'
The Facebook and Twitter account were only recently set up which could mean that in a piece of grim pre-planning, he created his social media pages knowing that these would be scoured when he perfomed the atrocities and his name became known.

both start on 17th and only post on that day, he has no friends, and all photos look photoshopped

Nope, they are real but made for this occasion.

I Agree he would want a specific photo to be used and not to have a "Wall Post" area and to specifically get his ideals across to the media. While the Norwegians I know area against capital punishment, they think this bastard should burn on the stake, and their from Oslo.

With someone as devious as this, Why would you beleive anything on this FACEBOOK page ?

I personaly would want him like this http://wisconsinhuntingpreserve.com/Portals/2/deer-photos/wisconsin-trophy-buck-hunts-5.jpg on a public place...

Possibly he set the facebook page up especially for the occasion because he knows it would be the first place the media would look.

He has a double identity on FB and he played Millionaire City for seven hours ago." Rodger needs help to build the golden statue - Worlds Wonder" . Very scary and strange.

Check the songs:
Fireworks
Out of the sky
Let it all out
Insomnia
After all
Big sky
Sound of goodbye
Ere the world crumbles
Hold on to me
Holding on to nothing
Freefalling

there is a patern...

While burning would be nice (I'm from Oslo), what probably will happen is good to: 21 to life in a psychiatric prison. In all likelihood he will never be let out.

This would be a good candidate for a bit of 'watersports' in Gitmo...

a set up. timothy mcveigh was not involved in the bombing. that there was more than one bomb is a covert fact. also radiation was found in the barley bombing. all evidence points to that being a small nuclear bomb there because of the damage that was done and fertilizer was supposed to be the ingredients in the bomb , but no phospates were found to be responsible for the damage that was done. it is interesting that this was done at this time to influence austrailians to support the hand above the government.

also thermite was found in all the dust for the trade center bombing and everyone knows that the official story is bs. it doesnt add up at all. check out 9-11 truth. see for yourself. the fact is all the secret services are primarily run by one had around the world. isnt this something that is done to create some political condition?

he should not take his jail time in Norway ask on of this countrys for help Norway would surly pay them for keeping him
http://akorra.com/2010/03/02/top-5-most-horrible-prisons-on-earth/

just look@ the CNN blog abt Norway attack,they try to connect this one with Alquaida,Bin laden and may be with Islam.But now we got a guy,who is anti Muslim, Freemason,ultra nationalist and mad.Terrorism is not related to a particular religion or race but it is a curse.here is the CNN blog link

@Fazlu: for real? 'terrorism is not related to a particular religion'? You're either living under a rock, a highly confused muslim, or a complete and utter idiot. Most likely, you're all three

@anonymous: It's unenlighened persons like you, that refuel the conflict between the west and the middle east. Fazlu is pointing out the fact that all terrorism seems to originate from some form of extremist misunderstanding of an idea - be it religious, nationalistic or simply psycotic.
A very valid point - that by no means calls for you to call the man an idiot. That's idiotic..

Anger is the key word in these kind of horrible things that happen on our planet!

There are narrow minded and mostly sick (weak or strong) people who are poluting our planet. Not one religion or conviction says it's okay to kill people.

Why did this man do it, was'nt he aware of the pain he would cause? Was he raised with love? Was he sick? Why, why, why ..... Maybe we'll find out eventually

The families who lost there relatives are the ones who need all the support they can get. And I hope they can put the anger aside eventually. But if something like that would happen to relatives and friends of me ..... I wouldn't know what I would do.

Anger is useless, love and sense is what this world needs.

you wacko, a small nuclear bomb destroyed the federal building in oklahoma? You are totally mad. And as for the "9/11 truth movement"; just totally pathetic. You need to realise that life is boring and mundane and just because yours is more boring than most that is no reason to make up crazy unsubstantiated conspiracy theories.

fool - you didn't even read what he said. he was talking about bali - not oaklahoma. and you are even more of a fool if you believe everything you are fed by your governments and their media bedmates.

not sure what to make of this terrible Norwegian tragedy - time will tell - may be one of the "lone wolf" extremist types with a perverted sense of logic, reasoning & justice....but despite the tragic and horrific nature of these events, they could easily be a diversion for some other more grand agenda

If it happened in Russia, he would be killed by the prisoners while being asleep. Death penalty for Breivik!!!!!

What's all this about the Facebook page being new? He wrote a 1500 page manifesto for the occasion. Why not set up a Facebook page while he's at it.

I also think that those photo are photoshopped!

The photos are certainly not the usual facebook quality i agree but if he did set up the accounts with the purpose that they will be looked at by millions of people and all over the TV after the event, then he wanted to make sure he looked presentable.

One day the chase will be over for you
And you'll find your own peace in the end
Some day you will find sanctuary
Death!...but so long mother fucker!

Look for a safe place where noone will find you
And try to escape from the law
Wherever you are there's a killer behind you
Wanting to get you for sure...

ADAM, EVE & THE LORD JESUS CHRIST SAID, "NO NUCLEAR PROGRAM, NO ARMAMENTS & NO MISSILES. ALSO, I PRONOUNCED ALL PEOPLES MARRIED SINGULARLY TO THE OPPOSITE SEX HUSBANDS & WIVES OF THEIR YOUTH IN HADES, SHEOL, HELL, PARADISE, OLD HEAVEN, OLD EARTH, NEW HEAVENS & NEW EARTH IN THE NAME OF THE LORD JESUS CHRIST AMEN.