End Of The World As We Know It 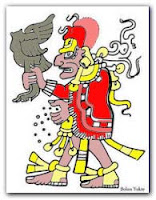 We do like a good old the-end-is-nigh story and we are sure to be hearing a lot more of our demise as we get closer to December 21 this year which is the date the ancient Mayan calendar stops and the war Deity Bolon Yokte is timed to descend upon us with great vengeance and furious anger.
Scary stuff but he could be hard pressed to find anybody left down here when he arrives because there is a stack of other things poised to wipe us out first.
Things like super volcanoes whose eruption is not just larger than normal but its scientific name is 'supermassive' and according to the Geological Society of London, 'would devastate an area the size of North America' and 'deteriorate the climate to such an extent that the very fabric of civilization would be threatened'.
One such super volcano sits beneath Yellowstone National park and the U.S. Geological Survey reassure us that such a supermassive explosion occurs about every 600,000 years. Less reassuringly they go on to say that it's been about 620,000 years since the last one.
If a super volcano doesn't do for us, it could be an asteroid. NASA catalogues all Near Earth Objects that are at least 1 kilometer wide as the impact of such an object would be expected to produce catastrophic effects for life on earth and so far 7,954 NEOs have been discovered with 1,215 classified as potentially hazardous and 992 of them greater than the catastrophic 1km in size.
In 1989 we came within 6 hours of devastation when the 300 meter wide asteroid 4581 Asclepius (1989 FC) missed the Earth by 700,000 kilometers, passing through the exact position where the Earth was only 6 hours before.
Throw in the long threatened global pandemic from mutating avian flu, the creeping devastation of Global Warming or even the Large Hadron Collider which is not running at full power but has already created tiny black holes and the scientists are are set to ramp up the power, and we have done well to reach this far.
My money for the end of life as we know it would be on the LHC warping space time so our world collapses into a gravitational singularity where not even light can escape and all matter is crushed to infinite density.
Sleep tight and don't let the chicken wielding Mayan Deity bite.
Posted by Falling on a bruise at 16:31

who is we? the sheeple? count me out.

You don't love a the-end-is-nigh story?

nah, i did when i was at univesity