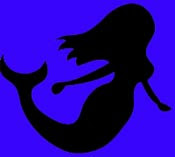 Remember a few weeks ago when the Centers for Disease Control told us there was no Zombie invasion imminent just before they went ahead with a large scale exercise in preparation for a zombie apocalypse, well another authority are now trying to tell us that Mermaids don't exist. Per-lease.
A recent documentary told the story of a scientific team's findings of mysterious underwater recordings and an unidentified marine animal
which had hands instead of fins and the hip structure of an upright animal.
Now along come the National Oceanic and Atmospheric Administration and rubbish the idea that a half-man/half-fish creature exists.
The NOAA page here addresses the age-old question 'Are mermaids real?' and concludes that 'No evidence of aquatic humanoids has ever been found'.
The documentary 'Mermaids: The Body Found' makes a case for the existence of the mermaid and provided a handy evolutionary guide which saw them branching off from a shared human root.
It also included some other evidence including sonar tests conducted by the US Navy during the 1990s and even tests actually conducted by the NOAA so although they deny their existence, they have conducted tests to try and find them.
Typical, just wait until i tell my talking unicorn about this, he will find it all so amusing.
Posted by Falling on a bruise at 23:01

I love things like this, probably because i didn't think people who actually believed in mermaids or zombies actually existed but for a Government agency to have to put out an announcement that they don't exist is just brilliant. Or they are just joining in the fun which is nice also.