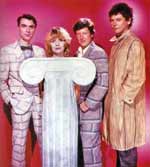 Talking Heads -
Qualifying Songs: And She Was, Once In A lifetime, Road to Nowhere

Talking Heads always seemed one of those secrets that some people in the know knew about but not much anyone else. Not being one of the cool kids i didn't notice them until 1985-ish and the song 'Road to Nowhere' when i went back and listened to the earlier stuff and pretty much unimpressed, forgot about them again.
With time i have grown to appreciate a few of their other songs, 'And She Was' which according to Wikipedia is about a woman out of her head on drugs and floating above the neighbourhood.
'Once In a Lifetime' is a lot less druggy and is mostly Byrne talking over what sounds like a Sci-fi backing track but it's the lyrics in this one that appeals, the existential crisis of all the things accumulated (a large car, a beautiful house, a beautiful wife) and the question 'How Did I Get Here?'
It's the drumbeat to 'Road To Nowhere' that draws me to it although i like the lyrics which are about taking a joyful trip towards death which is the nowhere making it the most cheerfully miserable song ever.
Apart from these three i still think i was right to ignore the rest, the gems in a steaming pile of pile of meh and i surprised myself that they qualified but only by the skin of David Byrne's skinny Scottish neck.
I think i will put them at the back of the museum, somewhere near the toilets.
Posted by Falling on a bruise at 19:34