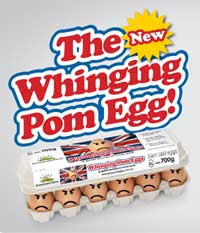 I do love the way us Brits can have a bit of laugh with our former colonies. Probably the former colony we laugh at, sorry with, the most is the Australians. The didgeridoo playing antipodeans seem to have this image of us Brits being a bit whiny. Not sure where this comes from and i'm also not sure why it is us who are the Poms. The first British settlers in Australia were convicts sentenced to transportation to the other side of the World wearing uniforms with 'POHM' which stood for 'Prisoner of His Majesty' on the back.
If anything we are law abiding non-Poms and they are the ones with the criminal element in their family.
Now the boomerang throwers have ignited a controversy with an Australian egg company launching the Whingeing Pom Egg, complete with a frowny face.
The carton says the eggs: 'Help you to wake up cranky and keep on whingeing all day long'.
In a press release, the company claims it studied 'behavioural traits of the Poms in their natural habitat' and quotes a Professor who states that: 'Our research found that the English preferred to wake up in a less optimistic, less good-humoured mood. Further still, we found that the gene responsible for whingeing is larger in Poms than any other race, particularly Aussies, confirming that whingeing is actually part of the Brits' generic make-up.'
Fair dinkum mates, those eggs will go perfectly with those chips on the Aussie's shoulders.
Now a nation that couldn't take a joke would comeback with Aussie eggs with little arrows on them all chained together or something but us Brits are above all that.
Got to give the Aussie credit though, they seem to have the courage of their convictions. Ahem.
Posted by Falling on a bruise at 00:00

I'm sure that the many free settlers that emigrated to Australia during its early days probably wouldn't appreciate your article, Lucy.

And the millions of those who came here from Europe after WW2 might not be too pleased either.

Fortunately the European migration and, more recently, migration from S.E. Asia saved us from being too 'British' and we now have the most cosmopolitan country in the world.

But Whinging Poms can still be found and we like to keep a few as curiosity pieces as well as a reminder of what we would've been like (a country of class-ridden, up-themselves drinkers of warm beer) if we'd had a closed immigration policy and only took people from Britain.

Of course, Britain is half black now, isn't it?

P.S. My wife is from China and a more delightful person would be hard to find. Fortunately she hasn't met a Whinging Pom yet! Could you sent a photo? :-)

Even in a light-hearted post like this, you can still rely on David to introduce his usual po-faced peevishness, plus (equally inevitably) a little touch of casual racism.

Take a chill pill, mate! It's all a bit of fun. Sheesh.

"Got to give the Aussie credit though, they seem to have the courage of their convictions. Ahem. "

I'm glad you noticed it was light hearted Cheezy, i'm not sure David did. Was he whinging about my post??

I laughed my head off when i saw this David and the video that went with it is hilarious. How would eggs poking fun at Australians go down over there?

as far as i can tell David thinks i'm in a constant state of confusion...

i must admit that in regards to this topic i am conused... i read it 7 or 8 times and i have no idea what the hell yawl are talking about...

my dear grandmother reminded us frequently that "much truth is told in jest"... like most western quotes i expect we took it from the chinese...

I'm doing my best to set you free from it, allow you to see what the U.S. is really all about rather than what it pretends to be about.

It's just another in the long line of the Aussie's and Pom's digging at each other q. It's all light hearted though and a bit of a joke. A bit like their soaps actually.

Daniel, IMHO, someone who can take a post about eggs and a friendly rivalry between England and Australia, and turn it into a rant against America (Again) seems to be the indoctrinated one.

Indoctrination : : to imbue with a usually partisan or sectarian opinion, point of view, or principle.

Have we looked in the mirror lately Skippey?

Wait... are these supposed to be racist eggs or something? What's wrong with Australia?

How long you got Nog?

90% of the many folk who contribute to my blog are Americans. They don't seem to have any difficulty seeing the huge shortcomings of their nation and its leadership!

They don't have any problem with recognizing that their nation is in the business of waging endless war to advance its imperial born-to-rule agenda and to fill its coffers with blood-money. They deplore it!

How come most of the Americans who contribute to this blog are so blind?

Guys, America is not the solution, it's the problem!

Daniel, have you ever heard of the expression "Beating a dead horse"?

Cody, you and your coterie of smug, indoctrinated, elitist Americans may continue to ignore the truth about yourselves and your warmongering, greedy, violent country as much as you like.
'Dead Horses' is an apt description!

One day, America will pay for its imperialism and barbarity. May that day come soon.

Grr... I want to know about the eggs! I don't care about imperialism at the moment. Tomorrow Texas can free itself from American imperialist oppression, Vermont can do what Vermont always does, Puerto Rico can declare itself independent, and the South can rise again for all I care, but none of this explains the eggs. THE EGGS!

Lucy retorts that the Australians are in fact a bunch of whiney felonious boomerang-throwing barbarians. Which would be perfectly accurate from anecdotal experience and serves as a flawless description of the Australian national character.

Actually all of the Australians that I know are wholly delightful, but the mere thought of any of them robbing banks with a boomerang while complaining endlessly is nonetheless exceedingly funny for some odd reason.

Come to think of it, we could start releasing "limey eggs", of course referring to all of our queen-loving Anglo-Saxon kindred. We could call it "The New Scurvy Lime Egg!". And we could paint it like a sickly lime in a sailor suit. Then y'all could sell imperialist cowboy eggs, grumpy tourist eggs, I'll bet you have WMD eggs, or something...


Now what I want to know is if anyone is actually buying these eggs.

I think you've nailed it there, Nog (and have written a very amusing comment in the process ~ I particularly like your idea of 'WMD eggs'... Suggested slogan: "These eggs are DA BOMB!")...

As for your last question, I don't know, but my guess is that there'd be plenty of people buying these 'whinging pom' eggs. The 'cultural cringe' is still fairly strong in Oztraylya, so any marketing tactic which has a little dig at the mother country would probably be quite successful.

NB: Like you, I know some cool Aussies too. Let's not judge them all by David, eh fellas? (like he judges us by others).

I despair. The world lurches ever closer to annihilation and what do people occupy their minds with? Trivia!

Talk about Nero fiddling while Rome was burning...

Off you pop to involve yourself with the serious business then, Dave-o. We'll miss you, but there's non-trivial stuff to occupy you now....

Very nice post, but let me say the thing works reciprocally, because here in Australia we make so much laugh at Brits! And besides, we are a colony!