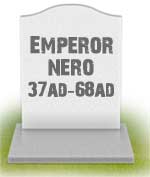 Reading history books you could be excused for thinking that i was an arrogant, self-centred mummy's boy and there is far too much about killing my mother and executing my first wife and kicking my second wife to death and far less about what an excellent fiddle player i was, and damn i was good.
During the great fire of Rome, which may or may not have been started by me, i had called all the Senators to my place to allow them the pleasure of listening to me play and although they protested that the city was going up in flames, being the consummate professional that i was, i insisted that the show must go on and if i say so myself, it was an epic performance, like Hendrix at Woodstock all those years later only without so many drugs.
I don't think the Senators were really paying attention, the city burning down around them and all that and i detected a severe lack of enthusiasm when i asked them to wave their hands in the air like they just didn't care so on the one hand Rome burned to a cinder but on the other, i gave a truly cracking show.
The history books also make me sound awful, especially the using burning Christians to light my garden at night but i tried Muslims and Jews and they just didn't burn so bright, lack of pork in their diet probably, and an Emperor shouldn't be expected to risk tripping in the garden and getting his toga muddy.
Also something the greatest ruler of the largest Empire shouldn't do is commit suicide in the wrong way which is why i asked several of my friends to try it first, which they did but all that screaming and stabbing themselves and bleeding, there was a lot of bleeding, i decided i probably won't do it after all and went back home.
With all of Rome baying for my blood i asked my secretary, Epaphroditos, to stab me when i wasn't expecting it and seconds later i was sprawled on the floor with a knife in my back.
My immortal words 'What an Artists dies in me' were true because a real Artist did die that day because if i say so myself, i really was one kick-ass Fiddler.
Posted by Falling on a bruise at 00:30