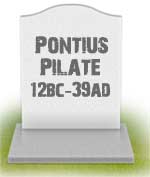 In my defence i was rushing to get to an orgy and it was getting towards the end of the day and my Personal Assistant Linda turned up with a death warrant just as i was heading out the door.
'A Jewish Hippy Carpenter who says he is the son of God' she said when i asked her who it was so i dashed off my signature and headed off to pick up the goat and a few extra long root vegetables before heading off to Flavia's orgy.
So while i was technically the man who sentenced Jesus to crucifixtion, i signed lots of death warrants, i was killing people left right and centre and he was on the list, and Jews saying they were the Messiah were ten a penny back then, odds were i would eventually kill the real one but the Jews were a real thorn in my side in Ancient Judea which was a great place to live apart from the Jews messing up the temples and you could get nothing done over Passover because they were all feasting and cluttering up the place.
You could even go as far as to say that i was the man who created Christianity because if i hadn't have crucified him in his prime, he would only have ended up like Elvis and been all bloated and massive sideburns in a stretchy white toga and there would be no Easter and that long weekend but where's my thanks for that?
It almost never happened of course because i did give the Judean crowd the choice of releasing Jesus or a thief called Barabbas and the crowd, all made up of the Jews this guy said he was king of remember, said free the thief so he toddled off and in a double whammy not only did their king get nailed up on a cross but when they got home half found they had had their belongings nicked.
So my legacy should be i invented Christianity as it is known today although i was nailing up people like a madman so i could have killed any number of messiahs and their religions before they even got going.
Posted by Falling on a bruise at 00:30