Chavez Does It Again 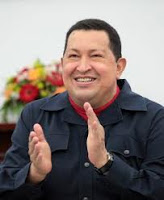 Two things that have the more excitable citizens of America foaming at the mouths are Venezuelan President Hugo Chavez and saying anything negative about their gun laws so when you put the two together the sounds of heads exploding all across the United States must have been deafening.
Personally i have never understood either, to my mind Chavez has been a godsend for the poor in his country and i have never heard a convincing argument to why anyone supports arming their own countrymen to the teeth but there you go, that's just me and when i read that Chavez has banned private gun ownership in Venezuela, i thought this was another example of why Chavez is by far my favourite politician in power today.
I couldn't resist peeking at some of the blogs and sites that Charlton Heston would have been proud to comment on before they prised that gun from his cold, dead hand and sure enough the gun-nuts were out in force condemning the removal of killing machines from the general public.
The general consensus seemed to be that if anyone tried to remove their weapons, they would kill whatever Government official turned up which doesn't really back up their 'i'm sane enough to own a firearm' defence. As sane as the next guy if the next guy happens to be Anders Behring Breivik maybe.
Much about the right to bear arms being the cornerstone of a free society and then just general abuse about Chavez being a fascist/Communist/dictator leading an authoritarian regime and quite a few mentions of hoping he dies from cancer soon after his recent scare.
One comment at a site that had a picture of a gun toting Rambo at the top summed it all up for me.
'When it comes to peace with my fellow man, I ultimately rely on firepower'.
Not understanding, tolerance, empathy or forgiveness, the way to peace is to blast them with as powerful a gun as you can hold.
Keep it up Hugo because when the nutters don't agree with you, you know you are doing something right.
Posted by Falling on a bruise at 18:57

Lucy, you speak true. All men who luv guns haff small willies and no brains. If they luv God too, they are a toadal waste of space.

I luv Hugo. I haff a posta of him nailed to my wall. I thunk that Yanks pointed a ray at him or put bad things in his soup. Bluddy Yanks. They are an orful waste of space too!

Lucy, will you speak to Comrade Cameron, tell him to stop trying to be Hitler. He is always bombing some poor bustards.

Sister, we are united in Piece.

In America there are so many reasons much of our population opposes gun control. I would be interested to see some sort of study to determine the US population's prevailing reasons for opposing gun control, but here are a few reasons just based off my personal observations in no particular order:

-Sportsmen/hunters who worry about restrictions on their pastime.
-Self-defense advocates.
-People who oppose gun regulation because they oppose regulation generally.
-People who believe an armed population is less liable to be oppressed by the government.
-I don't live in a city/state where there is much arms production, but I'm sure there are folks in those regions that don't want to see the job loss that would result from a gun ban.
-Some people really have no reason other than just thinking it's cool that we can have guns and people in other countries can't. This can include the perception that it implies Americans are more responsible than people in other countries that prohibit guns (I imagine this is how French and other European people think when they learn it's illegal to drink in the US until you're 21). This can also include cultural/nostalgic justifications, sort of like, "our country was founded on revolution, guns are in the Constitution, we've had them for over 200 years now, and that's just how we do things here."

My personal opposition to most gun control is just based on the fact that it's a lot harder for a government to oppress a couple hundred million people when lots those people have guns. I'm sure that sounds nutty, and I admit that the possibility that the US government will oppress us in not even on the horizon. Still, no free government lasts forever, and I don't want to be responsible for my descendants running around trying to defend themselves with pitchforks one day.

I hear the oppression angle quite a bit but that covers a very wide area so when you say 'to stop your Government oppressing you', can you expand? I think back to the Occupy movement or rather the end of it when the police removed the protesters. If the occupiers had been heavily armed, would this have stopped the armed police from manhandling them or would the police just have used overwhelming firepower and probably killed the majority of them? DO you not think that if your Government DID want to oppress Americans for whatever reason, because you are armed the force used would be so many times greater with military grade weapons against your guns?
Would you be happy knowing that you would be wiped out but you would go down fighting and could take a few of them with you possibly?

Well I'm certainly no militant. The kind of oppression I'm referring to is the sort where the population has no say, and no amount of democratic change or civil disobedience can change it.

The Occupy movement, in my opinion, was an attempt to build momentum to effectuate change through democratic means. Obviously, there was a fair amount of civil disobedience, but I think the ultimate goal of it all was to convince the "99%" to coalesce as a political force rather than to actually shut down Wall St. So the Occupy movement is not what I refer to because I think it is a movement that, for the most part, accepts that democracy in America still works alright.

What I'm talking about is when there is no democracy. Probably the best example right now would be the Arab Spring, with all those single-party dictatorships.

And, I know that most every government on Earth has way more firepower than even the most heavily armed populace, so I don't propose that, you know, some oppressed population could go beat the gov in a conventional battle. But conventional battle is rarely how revolutions start. These days they seem to start when a city says enough, and revolts, spreading to other cities, and then to elements of the military. I'm thinking Benghazi and Daraa here.

So I guess my question is, do you think the Arab Spring would have been so effective if the only people with any guns in those countries were in the military?

I used the occupy protesters as an example of the police being more heavily armed than the demonstrators when they went to enforce the law. If the protesters had been armed then the police would have been more heavily armed and rather than a few bruises, there would have been people killed so the use of force is proportionate to how well armed the opposition is. That leads me to the arab spring. In tunisia and egypt, hardly a shot was fired but the military refused to back the government and the government was overthrown. In bahrain the government was able to supress any protest with firepower as gadaffi was doing in libya and assad is doing in syria so how sucessful the public are seems to depend on whether the military back you or the government so it comes down to who has the biggest and more powerful arsenal. So my answer is it doesn't matter how well armed the public is because you will always be vastly outgunned.

lucy, if we americans had been gunless we would have celebrated the queen today... luckily we had guns.

also, supposedly (i haven't verified) in ww2 the japanese saw millions of registered hunters in the usa and concluded that an invasion would not work because they would be facing millions of americans with guns - as opposed to the millions of unarmed chinese that they killed by bayonnet.

oh and texas would be part of mexico today, except the texicans had guns.

maybe if the cubans had guns they would not be under the thumb of a dictator...

Therefore adding to my previous point that the side that is most heavily armed will prevail in any conflict therefore adding to my former point that Americans can be armed to the gills with hunting rifles, if Obama or Romney wanted to oppress you and turn you into a North American version of Saudi Arabia, they would and could which takes me back to my previous, former initial point that the reason yall all want guns is to stop the Government oppressing you is redundant.

yeah, i think you are wrong. afghanistan is unmanagable and NATO is ay more armed. of course, NATO tries to avoid killing civilians - that kinda weakens my argument.

i think you over estimate what 2M highly armed troops can do against say 50M lightly armed civs...

Well i think i am right. In Afghanistan the military is constrained, they have to protect the civilians (i know, stay with me) as well as kill the bad guys. In the unlikely scenario of Obama oppressing you, it would be gloves off, tanks and planes, heavy artillery and 500lb bombs dropping on you against 50m lightly armed civs. You still fancy your chances against that?

well, if the Cuba and Canada will help by creating a no fly zone over the US... yeah I'll take my chances...

I would write an angry blog post about it and boycott american goods and let my tea go cold before I drink it in solidarity with you.

im not sure what that means but it doesn't sound nice...

I agree that peeling off parts of the military has been one of the main objectives of all of the revolutions in Arab world. And in some cases it's clear that rebellious commanders and garrisons have been involved at the very early stages of the uprisings (e.g., Benghazi).

However, I don't think all of these revolutions at their very start were military rebellions--I think incorporating rebellious military units is often more of a second phase. For instance, from what I have read, the rebellion in Syria basically started when the populations of several cities just rebelled. In any case, I don't think it's a good thing when the population has to resort to begging the military to join them, considering militaries are dictatorships by their very nature.

I also agree that it's pretty clear that the more heavily armed the population, the more force the government is willing to use. But, the more force the government uses, the more aid the population seems likely to get from abroad. Take Lybia for example. Gaddafi starts using tanks and planes, and eventually NATO gave the Lybian rebels a proxy air force. In Syria, the continuing escalation of force has finally led to Russia and China even backing away from their staunch support for Assad.

Well, I guess Russia at least is actually not backing away, now that they're sending Assad a bunch of attack helicopters. But, my point remains that Assad wouldn't need attack helicopters to crush this rebellion if the Syrian populace was unarmed.