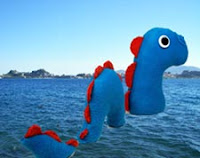 Apart from being the most famous person from Louisiana, Reese Witherspoon is widely regarded as an actress who can bring a smile to the lips of the audience with her portrayal of slightly dim characters.
Using their most famous resident as a template, it seems that Louisiana is now looking to churn out a whole generation of people we can laugh at as a Christian school has been using textbooks that claims the Loch Ness Monster is real, which disproves evolution.
The textbook being used by the Eternity Christian Academy in science classes advises the kids: 'Have you heard of the Loch Ness Monster in Scotland?
‘Nessie’ for short has been recorded on sonar from a small submarine, described by eyewitnesses, and photographed by others. Nessie appears to be a plesiosaur and the existence of dinosaurs living alongside humans discredits the theory of evolution, showing there was no gradual replacement of species.
Instead, it confirms creationist beliefs that all animals were created several thousand years ago, but died out because they were not taken on Noah’s Ark, apart from sea monsters who were able to survive in the water'.
On the one hand it's hilarious that an old legend that the Scots have exploited for tourism purposes is actually being cited by so-called serious educators.
On the other hand it's alarming that there are adults deliberately filling young kids heads with such nonsense.
'True science will never contradict the Bible because God created both the universe and scripture. If a scientific theory contradicts the Bible, then the theory is wrong and must be discarded,” claims the Academy who i suppose instead teach the completely rational theory that man was made from a pile of dirt and woman from a the rib of the dirt made man.
Puzzlingly, Louisiana is 48th worst performing state in the US for science and with people like these teaching the subject, I just can't see why.
Next lesson, Geography and how Beelzebub sunk Atlantis.
Posted by Falling on a bruise at 21:46

so, you're saying it isn't real?

Maybe 65 million years ago it was but i'm afraid it's just shopping trolleys and bits of old bicycles in there today.

is a "shopping tolley" what americans call a "shopping basket"? A thing with wheels and a wire frame that holds food and other stuff while shopping.

Sounds like the same thing. People use them to take home their shopping and then just dump them and kids push them into canals and lochs.