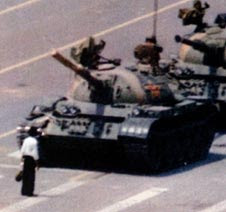 Twenty years ago today this picture was taken. A hunger strike by 3,000 students in Beijing had grown to a
protest of more than a million as a nation cried for reform. For weeks the people and the People’s Republic, in the guise of soldiers dispatched by the ruling Communist Party, warily eyed each other as the world waited. When this young man simply would not move, standing with his bags before a line of tanks, a real hero was born. The tank driver refused to crush the man, and instead drove his machine around him.
For a moment it looked as though the oppressive Chinese regime would follow the wave of other totalitarian regimes that were folding at that time in the late 80s.
Soon this dream would brutally end, and blood would fill Tiananmen. Two decades on and China has had something of a public relations make-over and everyone wants to be its friend but as it showed in Tibet not too long ago, not much has really changed.
This picture remains such an inspirational and powerful symbol of one person trying to make a difference against impossible odds.
Posted by Falling on a bruise at 20:53

That guy has the "right stuff". I was amazed then, I've been amazed many times since then, and I'm amazed now. He should be an American. Better, he should be a Texan.

Nobody has balls that big in this country, I'm pretty sure about that.

He is wearing a hat, can't tell if it's a ten gallon one though so he might be Texan.