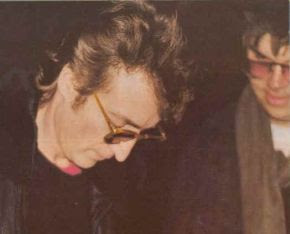 It is the 40th anniversary of The Beatles Sgt Peppers Album and as i was sitting in traffic on the way home tonight listening to a discussion on the radio about John Lennon.
One of the guests mentioned a conspiracy theory that his killer was actually Stephen King and not Mark Chapman at all.
After laughing like a drain, i made a mental note of the website mentioned and have since been poking around this chaps theory.
Indeed, Steven Lightfoot has a dedicated site that sets out his theory that Mark Chapman was a patsy and the real murderer is the famous author.
His greatest evidence is the above picture where, according to Lightfoot, 'the man photographed getting Lennon’s autograph hours before he killed him is not Mark Chapman like we were all told. Chapman’s glasses are the wrong prescription, his features are more centrally boxed in the middle of his face and his hair is the wrong texture, as well as the fact that the killer has dimples that Chapman does not. Only Stephen King’s features exactly trace the proportions of the autograph hound.'
Not convinced? He has threatening letters from King and other evidence and implores us to get the truth out there.
I love a good conspiracy theory and the loopier the better but tell you what, as far as getting the truth out there is concerned, shall we not but say we did if he asks?
Posted by Falling on a bruise at 00:23

Has Stephen King had anything to say about it?

I don't think I've ever heard a drain laugh before.

Ha ha! Has this guy been sued yet?

Stephen King has declined to comment according to the site which in Mr Lightfoot logic, only compounds his guilt.
This has to be my favourite conspiracy theory ever.

"Hi. My name is Steve Lightfoot. If you would like to purchase my evidence
magazine directly please mail $5.oo (check or cash) to me c/o;:
Steve Lightfoot
General Delivery
Santa Rosa, Calif. 95402"

Hey, Lucy, I live five minutes south of this asshole. You want me to stop by and say hi for you?

Would you mind Mark? Just pop by his place and check his head for signs of a lobotomy.

I did. And it would appear that his brain was removed and replaced with a cabbage...

Okay, I'll admit it: I killed John Lennon. The fact that I was 11 years old at the time just shows how precocious I was!

Seriously, that guy's in serious need of more pharmaceutical assistance. Or perhaps less.

Apparently he's earned a place in the Kook's Museum!

I just looked in the phone book to see if his number is listed. Eight or nine "Lightfoots" but no Steve or S.

Bummer. Would have been great blogfodder to interview him...

You better participate this time!

If we're to base this theory on that infamous photo, the "real" killer is every guy working the electronics department at Best Buy, Kevin Arnold’s brother Wayne from TV’s The Wonder Years or Ringo.

I think the theory is based more on a transmission Lightfoot received via his tinfoil hat, Jodie.

You really should trace him down mark, i have told so many people about it but nobody believed me!
I need a conspiracy theory to start, one so whacked out that it has to be true because nobody would be so whacked out to just make it up.

"You really should trace him down mark, i have told so many people about it but nobody believed me!"

I'll give it a whirl, but no promises. If it proves too time consuming. Unless your readers want to fund my research project!