Blueprint For The Wall Street Protesters 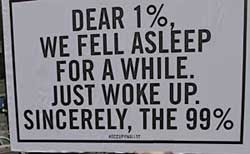 I expected the Wall Street protests to have fizzled out by now but they are still there making a noise and waving their banners but deep down inside they must know that nothing is going to change unless the few thousand turn into a few million and even then the Government and finance houses won't be overly concerned.
What will make them take notice is if the throng becomes organised because there is a way for them to change the system as we have seen recently.
Customers of the Dutch bank DSB forced it into bankruptcy by withdrawing £550m of their savings, Northern Rock in Britain was on the verge of collapse after customers withdrew their savings so how much more of a blueprint do the Wall Street protesters need?
Target one bank, and on mass, withdraw your savings. Panic ensues, share prices of that bank slump and you have landed one almighty black eye to the very people you are shouting and waving placards at.
After the first one, target another and the same tactic and that's another finance house with sharply reduced shares and directors facing a nervous board.
After the first few teeter on the brink, the rest will quickly take note and be desperate to avoid the same fate.
There are 320 million of you Americans, if even half of that many are angry at the banks living it up at your expense, that is the only way you have at giving them some of their own pain.
You can stand in Wall Street until this time next year and nothing will change, they can ignore you quite happily, but hit their profits by withdrawing your business, after all if they have less of your money to lend out, the less profit they will be able to make, and they will be forced to comply or face unprecedented upheaval.
As we have seen, it works and all it takes is one of the big name Wall Street supporters such as a Michael Moore to organise it, pick a bank, pick a day, and watch the banks scamper.
You are the 99%, you have all the power if you can focus it. The alternative is to stand around in the cold achieving very little.
Posted by Falling on a bruise at 18:13

Lucy, I'd wonder whether many of the protesters have much money in the bank to take out. The rich have already taken it!

Protesting outside the mansions of the rich might be a better strategy. It would be off-putting to have a thousand plus people turn up and howl and shriek insults and wave rude placards.

Anyway, whatever it takes is fine with me. But I still think that the guillotine provides the best answer!

It ensures the predators don't come back in another guise.

Being a liberal sort, I've never much liked the banking structure as it exists today. What I find odd is that those whose desired ends could not possibly be achieved without the banks as they presently exist would target them anyway.

Namely, who is going to lend the governments money to deficit spend on all of those wonderful social programs?

So by all means, toss the banks. It'll just mean that governments will starve from the lack of lenders who will lend them money and shrink down to a size that is more appropriate for furthering the commonweal.

your comment shows no understanding of banking. banks didn't make people use their credit cards to buy things. blame all the auto manufactures, appliance manufacturers, clothing producers, jewelers, electronics outlets, etc. they are the ones that say BUY BUY BUY BUY... the banks just enabled it with credit cards. the people VOLUNTEERED for 18% credit cards - the damn fools!

concerning homes, the banks did give many loans that they should not have given, but the home builders, plumbers, carpenters, electricians, foundation workers, etc are the ones that raised their profits faster than the increase in costs and THE DAMN FOOL PEOPLE lined up to buy the overpriced houses!!!

we should have let B of A fail (jp morgan chase, wells fargo, citi, and others would have bought the various components) but the DAMN FOOL PEOPLE don't understand how commerce works...

I have been lucky enough to travel to Europe, Asia and South America and find coming back to the US so strange compared to virtually every other country i have been, it really is an incredibly aggressive capitalist mindset, especially in the northeast along the 95 corridor.