Why Nobody Believes John Terry 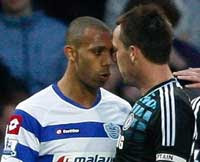 Chelsea manager Andre Villas-Boas has launched a defence of his centre back John Terry over his 'alleged' racist slur against QPR defender Anton Ferdinand.
Terry, the England captain, has denied racially abusing Ferdinand, explaining that what he actually said was 'Oi, Anton, do you think I called you a black ****?’
Ferdinand has yet to come out in support of that chain of events and is actually pushing for is club to make a formal complaint but Chelsea boss, Villas-Boas, has already come out saying Terry has his full backing and pondering that he finds it strange that 'people don't trust the words of a representative from your country.'
Ah, the old he-plays-for-England-so-he-must-be-okay defence.
So where to start with why nobody trusts the word of the English representative.
For the benefit of the new Chelsea manager, allow me to present the case why the country collectively rolled it's eyes when Terry declared his innocence.
In 2001, on the 9th September, in the immediate aftermath of the 9/11 attacks on New York, John Terry was fined for mocking American tourists at Heathrow Airport and in 2002, he was arrested for attacking a doorman in a nightclub and again in 2007 for damaging the scooter of a photographer.
His last appearance in a policeman's notebook was when he was fined and gained an extra 3 points on his licence for speeding.
Being a drunken lout off the pitch is not evidence that John Terry, England's captain, is a lying, cheating piece of pond life but having an affair with your best friends wife goes a long way towards it. Throw in the quotes about 'I've never cheated on Toni and I never would' before the news broke fulfills the lying, cheating part.
As does his taking £10k a time backhanders from a renown ticket tout for unofficial tours of the Chelsea training ground but being a womanising, lying cheating scumbag off the field is one thing but his on-field behaviour is not much better.
In the Champions League Final in 2008, John Terry was filmed having a word in Carlos Tevez's ear before filling it with a mouthful of spit.
My evidence ends in 2006 with the allegation that Mr Terry told Ledley King to 'Shut up you lippy black monkey' before getting sent off.
So did Terry call Anton Ferdinand a ‘black ****,’ on Sunday? Don't know, the TV evidence sure looks like he did and that is why Mr Villas-Boas, nobody trusts the word of this representative of our country but feel free to continue backing him and picking him for Chelsea because apart from being a Grade A sleazeball, he is also over the hill and it's my teams turn to run him ragged this weekend.
Posted by Falling on a bruise at 23:23

A superb summary of this civilised and erudite character.

About the only thing I have to add is that his Mum's a shoplifter, his Dad's a drug-dealer, and his brother, also a footballer, also had an affair with his team-mate's girl... the tragic ending to this tale was that the team-mate in question ended up taking his own life. Not that John's brother would have cared of course. He's a Terry. Caring is for pussies.

I guess you can't pick your family, so that's not really his fault. But I like to point it out anyway so people know that this despicable racist idiot comes from criminal/chav stock!

The sooner the likes of Terry, Cashley, and Wazza are out of the England team, the better. I find the side much harder to support with these pikeys in the team.

I agree, it is not easy to watch England at the best of times but with such a bunch of iffy characters in the team, it just makes it harder. Rooney has a few more years yet but Cole & Terry will hopefully fade away from the England team after the Euros next year.

England team is now teetering under the weight of it's own soullessness. Good on Wayne Bridge for refusing to give it the time of day.