What Would Muhammad Do? 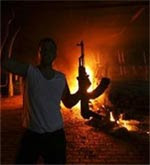 And the Lord did appear upon a mountain and hand to Moses two tablets upon which was written ten commandments of which the people of Christiandom must follow to be allowed into the kingdom of Heaven.
Only 10 i hear Muslims shout because they have 70 major sins to avoid and a whole plethora of minor ones that can be totted up to a major one although they don't actually tell you what the minor ones are, just that the sins which have no prescribed punishment in the Quran or the sins which are not mentioned as major.
Obviously confusing for the Muslim World which is probably why in the heat of the moment, when the Embassy gates are there in front of you, you just haven't got the time to run through the mental list of 'if i scale these Embassy gates and set fire to the building is that a Major sin' especially if the local Imam is handing you a lighter and giving you a leg up.
My list of big no-nos for Muslims includes at number 50 'Treating others unjustly' will get you kicked out of paradise as well as 'offending people and having an arrogant attitude toward them' and 'arguing and disputing violently'.
The other two you may have a bit of wiggle room but the last one may make things a bit sticky when you are up in front of the big man, especially if you have been one of those arguing and disputing violently these last few days.
Another major sin is 'not protecting oneself from urine' so don't get caught short when you are pulling up those paving stones to hurl through the windows of the Embassy's or trying to set fire to that American flag you had stored in the shed just waiting for an opportunity to put a flame to and dance around it while trying to not set your robe on fire. Wow would that be embarrassing in front of the International news crews.
Above all don't forget to keep mentioning that Islam is a religion of peace and if those Western infidels don't agree, well, maybe a week of rioting, killing and arson will make them change their minds. Peace be with you.
Posted by Falling on a bruise at 18:30

All religions, regardless of their mantra, are involved in killing.

The U.S., which, like Britain, calls itself a Christian nation, has killed more people than any other nation since 1945. It mainly kills Muslims although not exclusively.

Israel does its killing on a smaller scale but then it is a smaller nation that loves killing sub-humans, that is anyone who isn't Jewish.

The Muslim crowd enjoy killing too along with a bit of stoning and beheading.

The Hindus have been known to kill a number of Muslims and visa versa.

The common denominator here is religion all of which claim to be representing peace and love while they kill and destroy on a big scale.

Religion destroys peoples' minds, fans hatred and division. It has no place in 2012!

the common thread is people. eliminating religion won't stop murder. it will just change the rationale...

Indeed. Even if such a thing were possible, which it isn't. Not entirely.

Public policy should concern itself with 'the art of the possible'. It's perfectly feasible to enlighten a population over several generations - in fact that's what's been happening over the past few hundred years... science has been gradually, bit by bit, changing our beliefs from thinking that women were made out of some bloke's rib and the world is only 4,000 odd years old, to now knowing the truth about these things... And many other supernatural beliefs have been going the same way.

But it's not feasible just to say "right boys & girls, time to stop being religious!"... not while many people still see a 'God-sized-gap' in the scientific explanation of existence.

Ergo, we have to deal with the world as it is (comprising a great many religious people, or at least people willing to profess religious belief), rather than as we would like it to be.

I always thought it would be a gradual decline in the West as each generation becomes slightly less religious than the last but elsewhere it seems to be getting worse or rather, it is becoming more volatile.

lucy, why would it decline? why can't a person believe in god and pursue science? why do you think they are incompatible? because the Catholic church ignored reality? because a handful of radically religious people ignore reality? because some people with phd in their name talk with a false certainty about the unknown?

science and god are not incompatible. too me science is learning about what god created.