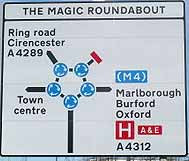 I travelled up to Swindon this weekend. Nice place with plenty of green open spaces and very clean but inside Swindon there lurks a deep, dark secret so cunningly devilish that only an evil mind could have thought it up.
Anyone who has ever driven through Swindon will have come across the Magic Roundabout, a monster of a roundabout that consists of five smaller roundabouts that somehow uttering 'what the f...' doesn't really do it justice as you approach it.
Cars are going in all directions, most of them round in circles as they try to get off one of the mini-roundabouts they have been orbiting
like a moon for the past 10 minutes.
Incredibly, i found out later that the Magic Roundabout was introduced there as it was the most dangerous junction in Swindon at the time and this was supposed to make it safer. Safer!!
I had the advantage of knowing about this traffic nightmare before, having heard sinister tales of it from colleagues who had travelled through the Wiltshire Town previously so when i saw the approaching sign it was with some apprehension.
As my husband calmly advised me to keep a close eye on the traffic approaching from the right and to turn slowly onto the first roundabout, i saw a gap and sped out, turned right, headed for the second roundabout and turned off to the nearest road to be greeted by the satnav telling me to make a u-turn when possible. B******s!!
So on my second attempt i sat at the entrance to the roundabout, calmly plotting my course weaving through the highway version of Hell and waited for a gap. Then the sign for Cirencester, which is where i was trying for first time, caught my eye and any carefully plotted courses weaving elegantly through the mini-roundabouts went out the window and I just gunned it straight across the middle.
When my husband got up from the fetal position in the footwell and i opened my eyes, we were on the road leading away from the Magic Roundabout.
Later on neither of us could work out if we actually drove the correct way aross the roundabout or risked leaving a trail of carnage in our wake but all i know is that the road planners in Swindon are either evil or mad.
If anyone stumbles across this post who are facing a trip to Swindon, my advice would be to carefully survey the traffic, work out which way it is going and when you see a gap, just slam your foot down, head for the middle and pray.
Posted by Falling on a bruise at 19:39

Much like the people who created the TV show 'The Magic Roundabout', the people who made this one must have been on some particularly good acid at the time.