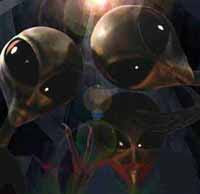 Neil Denny of Little Atoms Road Trip has began his 6000 mile road trip across America to look at science and skepticism in America and his first port of call is the SETI project in California.
At some point in everybody's life, they have looked up at the night sky and wondered if there is anybody else up there or are we alone?
The odds are pretty slim that life has not evolved elsewhere and it is just us funny looking humans kicking around in the whole Universe but if there are other lifeforms out there, they are not letting on just yet.
More and more countries are setting up a SETI (Search for Extraterrestrial Intelligence) projects, scanning the heavens for a sign that ET is not only there but is saying hello to us.
Unfortunately, there has been no discovery yet but what if one day there was a clear sign that there was intelligent life on one of the planets circling the billions of billions of stars up there?
If it was announced that we have received a signal from intelligent aliens 5000 light years away then i think we could expect a significant impact and a rethinking by the more religious amongst us but if the announcement was we have found intelligent life and they're coming for a visit then i think we could expect wide spread panic, remember Orson Welles 'War of the Worlds' radio broadcast, that didn't show us in the best light.
So the SETI guys would inform the President or Prime Minister of whichever country they were in that ET was calling and they would bear in mind what a bunch of reactionaries we are and promptly issue a blanket ban on releasing it to the public.
Then again how could they keep quiet a fleet of blinking spaceships descending on the planet ready to meet us which would cause even more panic which puts the SETI scientists and World leaders in the predicament of whether to announce it.
The part i worry about is the very real likelihood that contact with aliens would be a disaster for one of us because history has shown time and time again that when it comes to us humans, we are not the friendliest when it comes to meeting different cultures.
Posted by Falling on a bruise at 18:47

you know they will land in texas and get shot at! we dont like trespassers!

They may have ray guns and shoot you first q

sounds like shootin first and asking questions later is justified then...

I'm sure that we would have weapons pointing at them as they stepped off the UFO so they would have the same justification. I hope they land here and not in Texas then, you will get us all blown up within seconds of them landing.