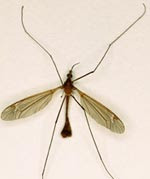 No matter how bleak the outlook, there is always a silver lining to every situation. Our liking for churning harmful chemicals into the atmosphere may well bring catastrophic weather conditions but at least if the human population goes, so will the hated Crane Fly.
Research from the RSPB leads them to conclude that because of global warming, the peat bogs are drying out and since the Crane Fly larvae need moist conditions to live, their numbers are falling dramatically.
I can't think of any other living thing that i would happily wipe out, but i would send the metaphorical rolled up newspaper into action without a moments thought to these critters.
As far as i know they are not dangerous like a mosquito or wield a sting like a wasp but they are just so damned clumsy and they fall apart at the drop of a hat.
Apparently, having detachable body parts is a defence measure which probably comes in handy in the garden but it doesn't do it much good against my husbands size 9 when i send it cartwheeling across the room. Not like i'm going to throw one of my own. Dead crane fly on the sole is not a good look.
The RSPB report also goes on to say that the Crane Fly has been around for over 50 million years but it seems they have met their match in big business and face a rapid decline. Not that much different to the rest of us come to think of it.
Posted by Falling on a bruise at 18:33

Shame on you! That fly might have had the cure for cancer and bad blogging in its DNA...

They have had 50m years to contribute Q and unless i am wholly ignorant of crane flies contributions to the planet, they had their chance.