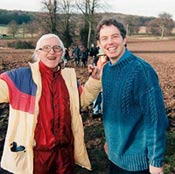 Usually when a person is being vilified, a picture of Tony Blair stood grinning beside them appears and right on cue, here he is with the most hated man in the country at the moment, Jimmy Savile.
Savile was today accused by police of carrying out four decades of sickening offences on a 'national scale' as more and more revelations surface of just what he got up to with young girls.
Such is the revulsion of the former BBC man that his family have removed his headstone 'out of respect to public opinion' and halls and streets named after him are being renamed.
Who do face an awkward decision are the Charities that Savile set up because whatever we think of him now, he did do a considerable amount of charity work, particularly the St Francis Ward and Stoke Mandeville Hospitals.
Now it has been revealed that Savile took young girls to the flat he was given at Stoke Mandeville they face the unenviable decision of  whether to continue to take donations from the The Jimmy Savile Charitable Trust, based at the hospital.
One argument is that they should decline as it is morally wrong to take money from someone who was giving to you while pursuing activities that harmed the people you were trying to help. How strongly can they criticise someone while still taking his money?
The other argument is to take his money and use it to help people who are victims of the Jimmy Savile's of this World, put right some of the wrongs that Savile done.
A tough decision indeed for the Charities and to their credit the trustees of the Jimmy Savile Charities appreciate the damage done to the Savile brand and have offered to spread the remaining money in the Charities between organisations that help sexual abuse victims before winding them up for good.
A great idea but again it comes back to the moral right of taking money from a man who spent his life making sure that organisations that help abuse victims were needed. Tough choice.
Posted by Falling on a bruise at 17:46

not a tough choice, but a convenient excuse for those people that seek excuses to avoid helping others...

Thanks to the Governments cuts they may not have a choice but to take the money. I would suggest the Savile charity change their name though.