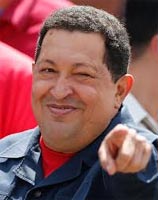 Three months after crowds celebrated another election triumph for Hugo Chavez, the crowds are gathering again but the mood is very different this time as their president is laid up in a Cuban hospital after emergency cancer surgery.
On the 10th January, Chavez is supposed to be inaugurated for a further six-year term of office at a ceremony but the president has not been seen or heard since his operation on 11 December, prompting speculation that he will not be there to be sworn in for his new term.
In such an event, the opposition are calling for new elections but the ruling United Socialist Party of Venezuela are saying that the Venezuelan constitution doesn't say anything about another election and the inauguration can be postponed and Chavez can be sworn at a later date.
'The president will continue being president beyond January 10, nobody should have any doubt about that," said the stand-in Diosdado Cabello who Mr Chavez handpicked to run the country in his absence.
The part of the constitution that the USPV are pointing to is Article 231 which states that 'The president-elect shall take office on 10 January of the first year of their constitutional term, by taking an oath before the National Assembly. If for any reason, (they) cannot be sworn in before the National Assembly, they shall take the oath of office before the Supreme Court' which they interpret as meaning anytime after 10 January as long as it is done before the Supreme Court.
The opposition are quoting Article 233 which includes the line: 'When there is an absolute absence of the president-elect before taking office, there shall be a new election by universal, direct and secret vote within the next 30 consecutive days. Pending the election and inauguration of the new president, the president of the National Assembly will assume responsibility for the presidency of the Republic'.
The official line from the USPV is that Mr Chavez has suffered from complications brought on by a severe lung infection that developed after his latest surgery and that the President is resting and recuperating after his surgery and we can only wish the man a speedy recovery. He is not only a colourful, amusing politician in a world full of dull leaders but he has been a hero to the millions of Venezuelans who have been raised out of poverty by his 21st Century Socialism movement.
Get well soon Hugo because as the pathetic, repulsive vitriol from the right wing shows, you must be doing something right to annoy them this much.
Posted by Falling on a bruise at 23:03

To the extent any Venezuelans have been raised out of poverty, it has mainly been because of Western hydrocarbon consumers (namely Americans).

It's not how you get the money, one of Britain's largest export markets is arms, it's what you do with it once you got it. He used it to help the poorest in his country which is why he is so loved by us Socialist types.