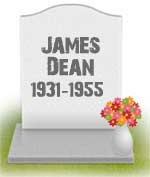 If there is one thing that really grinds my gears it's actors who are selfishly still alive and grabbing all the best roles so thankfully Hollywood has come around to the idea of casting long dead actors in their movies.
Not having a pulse and being dead is no longer the drawback it used to be for an actor as 50 years after wrapping my Porche Spyder at high speed around an oncoming truck, i'm back for movie number four.
Last seen moodily smoking in the 1956 film 'Giant', my next project is 'Finding Jack', a heartwarming tale of rescuing military animals abandoned at the end of the Vietnam war whilst smoking moodily because of all the actors alive today, none can smoke and look moody as well as i could.
Of course actors with a beating heart will probably be offended that the directors brainstormed the long list of available members of the Screen Actors Guild and plumped for someone who they have to resurrect from the grave rather than go for one who is currently alive but i am a fan of keeping long dead actors in business.
Living celebrities have a habit of messing up by talking about politics, being too demanding, wanting to be paid, acting surly in interviews and being exposed in newspaper stings with prostitutes but you know who won't let you down and can be depended on not to draw negative headlines? Someone whose career came to sudden halt due to a lack of working body parts 64 years ago.
Bringing back dead actors is the future for movies, i hear Alan Rickman, Patrick Swayze, Audrey Hepburn and John Candy are already pitching for the next Fantastic Four movie.
Posted by Falling on a bruise at 00:30