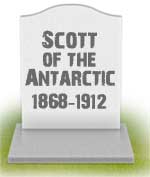 My mission was to be the first to reach the South Pole and to secure for the British Empire the honour of the magnificent achievement, basically to stick it to Johnny Foreigner and prove why Britain is the only country with Great in it's name although with hindsight, it was all a bit of a balls up.
Beginning 200 miles away from the Pole wasn't the best start and the thin woollen jumpers were a mistake and as the Norwegians took dogs and were big girls blouses, i decided we would use horses instead and the big, heavy wooden sleds which stuck to the ice were not my brightest idea and the food supplies were insufficient for the long trek but by George we stuck out
the British stiff upper lip gave it a good go, even though the stiff upper lip got frostbitten and fell off along with various other body parts.
As we were preparing i said to the gang that with all this top notch British equipment it was almost making the venture too easy and i would take a massive punt that we would easily beat Amundsen and his gang.
Captain Oates and the rest of them called me something very similar to a massive punt when we arrived at the Pole and saw a bloody great Norwegian flag poking out the snow, the other group having got there five weeks before us, boy i took some flak for that i tell you.
On the way back Captain Oates said that he was just going outside and may be some time, if i had known he wasn't coming back at all then we could have eaten his share of canned fish and maybe we wouldn't have all starved to death.
Posted by Falling on a bruise at 00:30