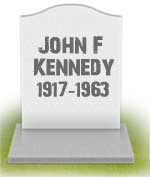 Bill Clinton was always compared to me but where he famously said that he did not have sex with that woman, i was having sex with as many women as i could get my grubby little hands on.
The owner of probably the three most famous initials in the World, i was not only the youngest person ever elected to the Presidency but also one of the sickest, i was always ill although that didn't stop me apart from when i was head down in the toilet.
The attempt to overthrow the big beardy Fidel Castro in the Bay of Pigs Invasion didn't quite go to plan but Cuba played a role in one of the events which made me the big name i would later become.
Khrushchev and I agreed to dismantle missile sites and a crisis which had brought the world closer to nuclear war than at any point before or after was averted and then there was the drive past that book suppository in Texas which proved to be a real headache, literally.
Something that has kept me entertained since that last trip to Texas though are all the conspiracy theories over who killed me, with foreign powers, the mafia and even the CIA all being floated as the possible executors but i really don't know, my mind was all over the place at the time.
Being considered as one of Americas greatest Presidents, i am always asked what i would suggest the  current unpopular President do to make himself more popular, a drive in an open topped car in Dallas would help his popularity i'm sure.
When i was President i asked not what your country can do for you but the current guy seems to be asking what his country can do for him, his family, his businesses and Russia and what's with this having sex with Porn stars, damned amateur, I had the worlds most beautiful woman but the only Monroe he will ever get into is the one in Maryland.
My legacy would be that even after my death, my family carried on where i left off, especially Bobby with Marilyn, the son of a...!!
Posted by Falling on a bruise at 00:30

he is considered one of the best presidents by democrats...