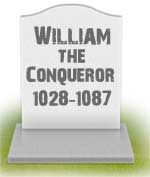 History is written by the people who killed all the other people who may have written it down and they tend to come out of it looking pretty good and considering what i did all those years ago, history doesn't make me look too bad.
The English never got the hang of giving themselves good nicknames so Ethelred the Unready was replaced by Edward the Confessor who had no children and promised the throne of the cold and rainy island in the North Sea which is dark by teatime for six months each year to both his brother in law, Harold Godwinson, and me and when he died i was in France hacking up peasants so Harold got his big grabby hands on it first.
Before becoming known as The Conqueror, my nickname was William The Bastard and i lived up to that nickname by being a complete Bastard and turning up on the English South Coast at Hastings.
I tried to be reasonable about it and patiently explained to the Anglo-Saxons that i was just trying to get what was promised to me as i burnt, looted and murdered them for 3 days on the way to meeting with Harold's Army at Hastings.
I was desperate to get one in the eye for Harold which i did as you can see in the Bayeux Tapestry but the English can be a bit uppity about being invaded so i had 500 castles built around the country as i united the counties to make England and to repel any rebellions while i burnt even more stuff  down.
I did hear that my funeral went with a bang, literally, as my body was so fat and bloated and my sarcophagus so small that when they tried to push me into it, my belly exploded.
My legacy is that i changed the English monarchy forever and that although i was French, i am known for being the first English King.
Posted by Falling on a bruise at 00:30