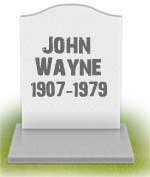 I was known as a super-patriot because i loved everything about America or rather everything apart from the American women which is why my wives were Spanish and Hispanic.
Despite being blessed with a christian name of Marion, i played the rough, tough guy in almost all of my 170 movies and in real life i was one of the few acting right wing Republican supporters who fought against Communism, a view which reportedly annoyed Joseph Stalin so much he contemplated having me assassinated, the damn pinko had obviously never seen me in True Grit, i was great.
As a right winger in the 1970's, i had strong views on social and race issues and supported white supremacy and was no fan of the Native American Indians, telling them that them wanting to keep their land to themselves was selfish.
I also had no time for fags because being a fag isn't what rough, tough Americans are all about.
America is about cowboy hats and apple pie and baseball and shooting guns at each other and not having whiny pinko commies and blacks and fags cluttering up the place.
As Americans we can go into countries and tell them what to do because we got the bomb and now we have a leader who is crazy enough to use it.
God bless America and everything about it, even the women although i wouldn't marry one myself obviously.
Posted by Falling on a bruise at 00:30