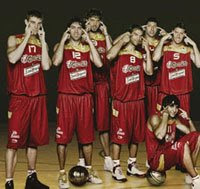 Maybe i have been sniffing the furniture polish too much again but isn't this picture offensive? Incredibly the players on Spain's Olympic basketball team thought it would
be 'interpreted as an affectionate gesture' to use their fingers to make their eyes look more Chinese.
The photo, part of a publicity campaign for the sponsor, shows all 15 players making the gesture on a basketball court adorned with a Chinese dragon.
"It was something like supposed to be funny or something, but never offensive in any way and I'm sorry if anybody thought or took it the wrong way and thought that it was offensive"
explained player Pau Gasol.
The Spanish women's basketball team also posed for photos doing the same thing but it is not the first time Spanish sports has encountered questions over racist attitudes. Recently England's black footballers were treated to monkey chants when they played there in a friendly and Formula One driver Lewis Hamilton was subjected to racist abuse at a Barcelona circuit earlier this year.
'We don't think this is an insulting gesture to the Chinese' said a Spanish official so how about when you step up on the podium to collect your medals Spanish basketballers, you do it and see how affectionate the Chinese find it then.
Posted by Falling on a bruise at 21:20

I am amazed at how far humans HAVEN'T come, empathetically speaking.

They're not comedians, they're Olympians.

I can't see how they thought it would be anything other than offensive and how they can even begin to justify it. Glad to hear they got beaten by your American basketball team today.

Agree with Annie - it's hard to believe this sort of thing still gets through - kindergarten stuff.