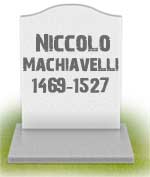 I am one of those historical figures whom everyone has heard of, but few know anything about although most know that being called 'Machiavellian' is never a compliment thanks to me and one of the most notorious political treatises ever written, designed as an instruction manual for any dictators to be even bigger bastards with the central theme being that it is more politically profitable to be feared than loved, and that dishonesty and lies pay off in the long run.
It came about as i was working for the Florentine Republic before the Medici family marched in, threw out the government and dislocated both my shoulders whilst torturing and exiling me, out-Machiavellied you could say.
It was while in exile that i wrote 'The Prince' to brown-nose my way back into the government with a text book for the Medici's, encouraging them that the ends justified theie terrible means and in a time of short-lived Italian governments, to engage in evil when it would be necessary for political expediency is the way to go.
It never worked as it wasn't published until five years after my death but leaders such as Henry VIII and Joseph Lenin have used the basic principles that a ruler must be willing to act unscrupulously to be feared, ruling by fear of punishment including brute force and the removal of anyone who may challenge their authority or who will inevitably attempt to replace them as ruler.
Of course five centuries on my views are pretty antiquated, i mean what population in the 21st Century would ever elect someone to office who is not virtuous, generous and merciful, honest and faithful?
Posted by Falling on a bruise at 00:30