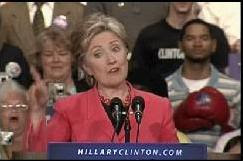 Something that i found out only recently was that the supporters who stand behind the podium when Obama, Hillary or that old bloke give speeches are hand picked by organisers in order to reflect the candidate's demographic reach.
I always assumed they were just ordinary folk who had somehow happened to snag the best seats.
As the winner sets about their victory speech or the loser set about their speech that sounds like a victory speech, inevitably the viewers attention begins to wander and eyes are drawn to the supporters behind the candidate's head.
Black, white, young, old, the suited, the denim clad and everything in between seem to be packed in behind them and whooping and waving their banners enthusiastically. Some have cameras to snap the back of the object of their affections head but all are in a highly excitable state.
Sometimes that excitement can spill over into the sort of behaviour that could be considered inappropriate at a televised public meeting which could explain just why that guy to the right of Hillary in the picture above is wearing boxing gloves.
Maybe he is making a statement about Hillary battling back or boxing clever or something along those lines or maybe the man is wearing them for 'medical' reasons. He does seem to be squinting in this photo so possibly his eyesight is beginning to dim.
Whatever the reason, Hillary's campaign people never saw fit to banish him from the frame so they are obviously aiming for the much maligned and misunderstood men-who-have-to-wear-boxing-gloves-in-polite-company vote.
Good for her but if you find yourself behind one in the booth come November, you might want to give the pen a wipe before you use it.
Posted by Falling on a bruise at 23:49

Possibly the saying about about any man who is not a boxer but is wearing boxing gloves has not reached over there from here Q. Shame because you missed out on the whole childish humour of the post.

I worked on a mayoral campaign once and the campaign scoured the volunteers all day looking for someone from as many demographics as possible to put behind the candidate during his televised victory speech. It was pretty pathetic.

I have to admit, as much as I support Obama, and I do, I was cynically amused by how many salt of the earth, white, working class looking people were in back of him at last night's rally, where Edwards endorsed him.

I also totally approved. After all, I want him to win. However, I have to say the boxing gloves kind of mystify me. I guess it's a Rocky reference. Only thing I can think of.

I will be watching the crowd behind the speakers more closley now that i know they are actually handpicked top give an image. I usually see them but don't really notice them if that makes sense.

Yeah - politics sure is all smoke and mirrors Lucy...I didn't know that the audience was hand-picked either. But I'm not surprised.

Yeah, it wasn't funny to me. It was goofy. But you made good observations about the guy and me!

Sometimes us limeys and you yanks have a very different sense of humour Q. I was quite proud of that final sentence as well.

Actually, I often find it harder to look at the candidate than at the backdrop. Think of all those speeches in New Hampshire where 3 of the 10 people behind the candidate are black. There probably aren't even 3 black people in the whole state of New Hampshire! But South Carolina is the next state to vote after NH, so...