Any Reason For A Clooney Picture 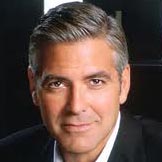 George Clooney was enjoying a meal with some friends in a Berlin restaurant and was a bit concerned that the group were being a bit too lively and talkative so as way of apology to the nearby eaters, the actor paid the bill for the nearby table’s dinners.

You never see him in the gossip columns or bad-mouthing anyone and he cares about the environment and the feelings of other people.  It is an added bonus that he is so god-damned handsome. All around nice guy.
Posted by Falling on a bruise at 21:53

You had me at George Clooney! I do agree that he seems quite unlike many of his ilk.

He must have some faults but as yet i haven't heard of any.

Cary Grant was a very handsome man. I always got him confused with Rock Hudson and James Stewart though. They have a statue of Grant in Bristol but you would never guess he was from there, he hid that awful Bristonian accent very well in his films.