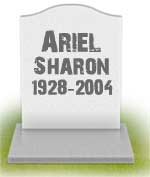 Billy Joel told us that only the good die young and to prove his point i died aged 85 which isn't bad for a man named after a washing powder and a fruit who waddled around weighing 27 stone (378lbs).
To be fair as the President of Israel i did have a lot on my plate, mostly chocolate cake and dessert, but i had to show that i had the stomach for the fight and the appetite for taking what we could from the Palestinians, i was
always hungry for more land and those Muslims won't just blow themselves up, well actually...some do but you know what i mean.
As someone who always had the stomach for a fight, i showed a woeful lack of self-control in the face of war but it was also the same lack of self-control in the face of Danish Pastries and Cheesecakes that got me in the end.
At my funeral the US envoy to the Middle East said that Israel has 'lost one of it's giants' which was true although a bit insensitive to make fun of my girth at a time like that and to be fair, i wasn't going to get any bigger, very much thinner if anything.
As for my legacy, the Palestinians are still forcibly suppressed, Israel continues to steal their land and there is as much chance of my nation agreeing to a peace deal as there was of anyone finding salad in my massive fridge so i can rest in peace with peace being my code name for fresh cream donuts, and i was all about the peace.
Posted by Falling on a bruise at 00:30

only the good die young. well, if a musician, singer, song writer says it, then it is beyond disputation. almost as legit as coming from a leftist or journalist...

yeah, that looks as stupid as i expected it would