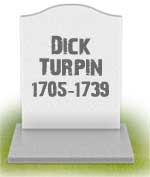 I started out as a butcher down in Essex but i knew all the local bad guys and would fence the deer that they poached but we quickly moved into burglary and rampaged around Essex, burgularising the local Farms but when the law came for us, i managed to escape and my gang were all executed or sent to the thirteen colonies in the New World.
People think we only sent our criminals to Australia but we also sent them to the wasteland that is our thirteen colonies in America, i wonder how sending tens of thousands of murders and hardened criminals en mass to start another country worked out.
After out burglary was disrupted, i donned a handkerchief and became a highwayman and robbed and stole from the stagecoaches travelling around London and Essex but the fuzz were on my back all the time so i changed my name to John Palmer and ran away to Yorkshire.
My downfall began when i was put in prison for shooting another mans chicken during an argument and was fined which i refused to pay so was put in prison.
From my cell, i wrote to my brother-in-law but the tightwad refused to pay the delivery charge as he said that he didn't know anybody in Yorkshire and the letter sat at the local Post Office where it was seen by the local postman, who by a twist of fate, was the man who had taught me to write and on recognising the handwriting, alerted the local lawmakers that John Palmer was actually Dick Turpin and claimed the £200 reward.
I was a vicious highway man and inspired the Adam Ant look but my crimes brought me fame but i was stitched up by a postie which is not such a glamorous end.
Posted by Falling on a bruise at 00:30