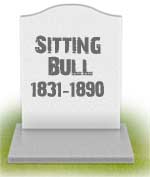 When i was a kid the only white thing all over our lands was snow but then along came the Europeans and screwed up everything.
I was named Jumping Badger at birth but that isn't a name to strike fear into my enemies so changed it to Sitting Bull which on reflection isn't much scarier, Leaping Wolf or Bounding Rattlesnake would have been better.
Within a few generations of the Europeans arrival, those of us who had not been wiped out were rounded up into reservations, and to think Americans complain today about people turning up from other countries and refuse to assimilate to their culture and threaten their way of life!! Man, that must really suck, oh wait..it does.
If only we had thought of building a thumping great wall to keep them out.
As if that isn't bad enough the Americans then named their helicopters Apache after the native indigenous Indian tribes and armed them with Tomahawk Missiles although i bet General Custer wished he had one of those at the Battle of Little Bighorn, his Last Stand didn't see him do much standing, more him laying down and bleeding.
Although we don't celebrate Columbus Day, we do have Indigenous Peoples' Day that celebrates and honours the Native Americans, to celebrate Columbus would be like the Poland celebrating Hitler's arrival in Warsaw although arguably he did use the Americans idea of rounding up and killing the natives or sticking them in camps.
They called it the New World but it wasn't new to us although to see what they have done to it, we certainly don't recognise it now.
Posted by Falling on a bruise at 00:30

funny, the spanish killed 90% of indigenous peoples in the west and you spent most of your words berating what happened in the USA between 1870 and 1890

Most words about a 20 year period? Reading or maths you have the problem with on this one?

you don't even mention the spanish who by far did the most damage... almost exclusively in south america; and did the majority of harm in north america

Sitting bull was most known for the Custer thing so that’s were i went with a sprinkling of flippant ironic lines about people coming to USA and not assimilating. The rest is padding and no mention in any of the sitting bull entries I looked up was the Spanish mentioned so they were not included.

then circa 1720, Mexico picked up where Spain left off...

the native americans, in what became western US and southwest US, were extremely sparsely populated, and claimed huge swaths of territory.

so, german migrants to texas, circa 1850, set up communities and homes without seeing any native americans. then, years later, after the settlers had built homes, cleared land, planted crops, built fences, etc. the commanches or apaches would show up and say it was their land... violence ensued... several books/diaries from the german settlers available that elaborate on the trials and tribulations of dealing with native american nations in central texas (new braunfels, kerrville, fredericksburg, boerne, shiner, etc.).

side note - i grew up about 5 miles from "commanche hill" which was a lookout post for the US army in the late 1800's...