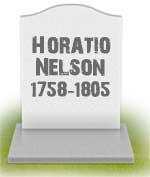 For a great Naval Officer i spent a lot of time leaning over the side of the ship taking another look at my lunch so for someone who suffered with such terrible sea-sickness, a life at sea may not have been the smartest career move but a large column in Trafalgar Square says i must have done something right.
The Navy life separates the men from the boys and normally, in the Navy, that takes a bucket of very cold water but i joined the navy as a nipper so i learnt very quick you lay on your back in bed or else someone else will.
I lost my eye aged 36 when a shot hit a sandbag on the side of the ship and a piece of grit flew up and hit me in the eye and then four years later, whilst stepping ashore i was hit in the right arm by a musketball, which fractured my arm bone in multiple places.
I was killed aged 47 when a Spanish marksman shot a bullet through my left shoulder and shattered my spine which has led to many historians asking why i insisted on wearing a bright red tunic in battle as it made me an easy target for marksmen.
To answer that, it was bright red as should a bullet enter my body the red will cover the sight of any blood, it is the same reason that my trousers were brown.
As is fitting for one of Britain's greatest Admirals, to transport me back to Old Blighty i was stuffed into a casket of Brandy and then transferred into a coffin filled with wine but something i must clear up are my famous last words which were not Kismet Hardy but Kiss Me Hardy, he was a good looking guy and in that uniform, well, we were at sea a long time.
Posted by Falling on a bruise at 00:30