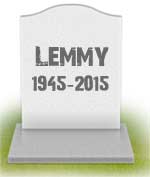 It takes some doing to get fired from a heavy metal band for abusing drugs but that is exactly what happened to me when Hawkwind told me to go do one when i got busted in Canada for possession so i formed my own band and called it 'Bastard' but was advised that we would never get on Top of the Pops with a name like that and because i was so looking forward to meeting Bruno Brooks and Simon Bates, changed it to 'Motörhead' instead.
I always said that i wanted to live fast but die old and somehow, despite puffing 60 cigarettes a day and downing a bottle of Jack Daniels before lunchtime, i made it to 70.
I was a proper hard living rock star, the music stars today are more likely to fluff the cushions and run a hoover around a hotel room than wreck it and while i was sucking down LSD and amphetamines by the bucketful, the likes of Justin Bieber and Justin Timberlake would be reading the side effects on a Lemsip sachet before taking it.
I always said if you're going to be a rock star go be one. People don't want to see the guy next door on stage, they want to see somebody they would never meet in ordinary life and there was not many, if any, of the likes of me.
I was not much cop as a musician but i played so damned loud that nobody seemed to notice, if you didn't leave one of my concerts with blood leaking from your ears as your eardrums stretched to the point of disintegration, then i would have failed.
My legacy was that i played loud, lived fast and died old but f*** knows how!
Posted by Falling on a bruise at 00:30