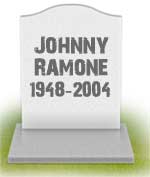 Mention the names Thomas, Jeffrey, Dougie and John and you will be met with blank stares but say Tommy, Joey, Dee Dee and Johnny and everybody will know it's The Ramones although we were not really appreciated at the time.
The band was mine, Tommy's and Dee Dee's and Joey came along later which worked out well for me because i got off with his girlfriend which didn't go down well with our lead singer who hardly spoke to me afterwards which didn't really bother me, the guy was a complete tree hugging lefty so he wouldn't have had much good to say anyway.
I was famous for only playing downstrokes but i almost gave it all up after all my guitars were stolen from my lock-up and Robin Zander of Cheap Trick suspiciously began playing an identical model shortly afterwards and i threatened to knock him into the middle of next week but before i got the chance, Seth Macklin of the band Sub Zero Construction knocked me into the middle of last week when i said some unfriendly things to the woman he was with who i had once dated and his boots did some unfriendly things to my skull, fracturing it and it was only emergency brain surgery that saved the Ramones from becoming a trio.
Apart from being a pinko, another reason for disliking Joey was that he always made us late, or rather his OCD did.
Whenever he walked down some stairs he had to step onto the ground off the last step onto his left foot and if he never, he would return to the top of the stairs and start again, and he lived in a 5th floor apartment. Nightmare.
For a bunch of disfunctional kids from New York who were all destined to an early death from a drug overdose we did okay, especially as we pretty much played the same song over and over for 22 years.
Posted by Falling on a bruise at 00:30