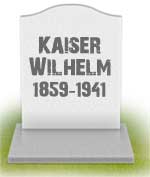 It is hard to believe that the First World War was fought between cousins, with England's George, Russia's Nicholas and i all being grandsons of Queen Victoria.
Nicholas and George would make fun of me as we grew up as they both had full ginger beards and would mock me for my funny little moustache and my withered left arm, especially as i was Granny's favourite.
She even knighted me and i was at all the big events until our Governments fell out and we sent we sent telegrams, hoping to stop a war but when i called the English Mad March hares, that didn't help.
Ginger George, with his German blood, changed his name from Saxe-Coburg which sounded much too German to Windsor like the Castle and Nicholas and George ganged up on me with the French, who they hated, calling them those snail sucking, frog cooking garlic stinkpots but the Russian Revolution and that lovely Mr Stalin and his moustache sorted out Nicholas but George the carrot top refused to back down and kept fighting so when the war turned against my mighty German army, i ran away to the Netherlands.
I had dreams of being Wilhelm the Great but ended up more like like Billy no mates, Granny must have been spinning in her grave.
Seems the British, Russian and French had no problems when i was taking parts of Africa and Asia but pick a fight with tiny, inconsequential Serbia and all hell breaks loose.
All World War One did was set up World War Two and Germany lost that one as well but as they say you can't win them all but one would have been nice though.
Posted by Falling on a bruise at 00:30