Comrade Santa Is Coming To Town 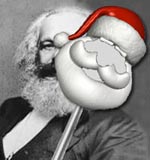 I know that there has been some speculation about Santa's ideological leanings for some time now and i can keep quiet no more, yes, he is a Communist.
Really, it wasn't that hard to work out, he is a big fat guy with a bushy white beard. Remind you of anyone, maybe one of the Marx family?
Then there was the red suit and the giving stuff away and not selling it for a massive mark-up, it isn't brain brain surgery people, it's all about redistributing the toys. he doesn't even pay his elves, the workshop is owned by all of them including the reindeer and Mrs Claus.
The less subtle clues were the fact that 'Ho, Ho, Ho' is Latin for 'Workers of the World Unite' and if you play the chorus of 'White Christmas' backwards you can clearly hear the phrase 'From each according to his abilities, to each according to his needs' repeated over and over.
Then there is the list of all the boys and girls and who are either in the system (nice) in which case there are richly rewarded with presents or outside of it (naughty) and they get nothing.
So yes, for all those who have suspected that he has been brazenly feeding Marxism to the innocent, capitalist offspring, you are right so, you better watch out, you better not cry, you better not pout and i'm telling you why. In 19 days Santa Claus is coming to town and he is carrying a hammer and sickle comrade.
Posted by Falling on a bruise at 18:39