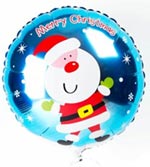 Who doesn't love a version of Jingle Bells sang with the aid of a Helium filled Balloon. The medical and science people as it happens because it seems that more important than reading from the newspaper in a hilarious Mickey Mouse voice is protecting the depleted source of Helium for medical purposes.
The first reaction to a world without floaty balloons and squeaky voices is to protest 'stop wasting helium on science experiments then' but let's hear them out.
The people who count these things say that the Worlds Helium supply is due to run out within 30 years and we should be using our limited resources for more pressing functions such as cooling magnets in MRI scanners, in space telescopes, in space rocket engines and developing fibre optics.
Professor Robert Richardson, of Cornell University, who won the Nobel physics prize for his research into Helium, argues that a helium party balloon should cost £75, to more accurately reflect the true scarcity value of the gas.
The Helium balloon folk say that balloons don't take up that much of the available supply, between 5% and 7% of the total helium usage but there is no denying that although it is the second most abundant element in the universe, once the Helium reserves are gone, they are gone for good as there will be no way of replacing it.
So in reality we shouldn't be wasting Helium on balloons when it has such other, more serious, uses but the  alternative to a lighter than air gas to replace it with is Methane and there is an abundance of that around, especially at this time of year when Brussel Sprouts are on the menu.
Might make blowing them up at a kids party interesting though and no squeaky voice, no matter how hilarious, would be worth inhaling that.
Posted by Falling on a bruise at 20:20

seems to me that instead of this insanity they should instead find an alternative to helium...

and didn't they say 30 years ago we would be out oil today - yeah they did.

and didn't they say 30 years ago we would be in a new ice age - yeah they did.

They are not very smart...

They may well need to find an alternative if we are running out but as much as i love the squeaky voice thing, it does seem wrong to use it on balloons when more important things need it.

This is sure going to be fun!

you (we) are running out time! better not waste it on silly things...

I think my Methane idea is a good one and there is a never ending supply of that, just strange that the male part of the population seem to have the most of it.

its due to all the muscles and brains... or maybe something else