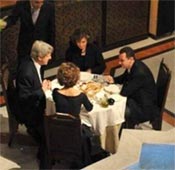 It had to happen, pictures have emerged showing the US Secretary of State John Kerry having a cosy dinner with President Bashar al-Assad, just as Mr Kerry is describing him as a thug and drawing comparisons between Assad and Adolf Hitler and Saddam Hussein over their use of chemical weapons.
During the visit in 2009, he said in a press conference: 'President Barack Obama's administration considers Syria a key player in Washington's efforts to revive the stalled Middle East peace process' and called Assad and Syria 'an essential player in bringing peace and stability to the region'.
Now Kerry wants to take his shaky at best evidence and throw a part of his countries military arsenal at his dinner partner claiming: 'History would judge us all extraordinarily harshly if we turned a blind eye to a dictator'.
Perhaps Kerry has evidence that he and Mrs Kerry were kidnapped and forced to pose for the picture, i'm sure that he can dredge up something from somewhere if he tries hard enough.
I suppose the case is that back in 2009 nobody guessed that the man would turn into a prospective murdering psychopath willing to kill thousands of Syrians to further his own interests but everything looks so cosy there, how was Assad ever supposed to know?
Posted by Falling on a bruise at 21:20

I heard hitler had friends too...

It's what "we" do. Glorify, then demonize them to suit our needs. Gross.

Quite strange because we were only talking about that photo of & Rumsfeld and Saddam a few days before and i wondered if there were any of Obama and Asssd and then this one popped up a few days later.

Sitting down and having dinner with these blokes is the least of it... The list of US & UK backed tyrants is a long and undistinguished one - Pinochet, Abacha, Batista, the Duvaliers, Noriega, Franco, Somoza, Suharto, Idi Amin, Ian Smith, Mubarak, etc, etc, etc...