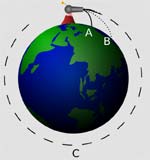 Christmas is a time when many people travel around to visit family and friends and many of those would clock up more than 250 miles in a round trip but hardly anyone will do it the way Tim Peake has done it today
as he went straight up and will be donning his Christmas jumper 250 miles above our heads at the International Space Station.
Along with his Russian and American colleagues, he took off in the Soyuz rocket from the Baikonur Cosmodrome in Kazakhstan this morning for a 6 month stint aboard one of mankind's greatest achievements which skims along at an average speed of 17,500 mph.
I am sure that we will be treated to many pictures of Tim and his fellow astronauts in space appearing weightless but as many people believe it isn't because there is no gravity, if that was the case then the moon and planets would have floated away a long time ago, they are actually falling around the Earth.
Imagine shooting a cannon, (A in picture left) the cannon ball will fly along until friction slows it down enough and gravity pulls it towards the Earth and it drops down and hits the ground.
Imagine now using more gunpowder and shooting the ball even faster (B) so it travels further until friction and gravity drag it down to the ground.
So the faster you shoot the cannon ball, the further it goes so what would happen if you could shoot a cannon ball out of the cannon at such a speed (17,500 mph) that as the ball fell to Earth, the earth curved away so the ball would be falling but the Earth at the same time would be curving away at the same rate that the ball was dropping (C).
With no friction to slow it down in space, the ball would continually be falling and the Earth curving away so the ball would never actually be able to fall to the ground and so it said to be in orbit around the Earth.
As the International Space Station is travelling at 17,500 mph around the planet (falling towards the Earth like our cannon ball but remember at the same time the Earth is falling away from it) the astronaut is also travelling at 17,500 mph, and is therefore also falling around the Earth.
So, when you are in orbit, you are in free fall but going so fast that you won't actually reach the ground which is continually moving away from you at the same speed that you are falling.
Posted by Falling on a bruise at 11:50