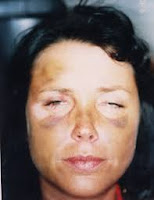 The bizarre thing about Geoffrey Boycott being nominated for a Knighthood is that Theresa May, on putting his name forward, she must have known about his conviction for assaulting his then girlfriend in 1996.
Nobody can forget the horrific pictures of the damage the 22 punches to her face and body that he delivered left on her, damage that he denied causing, blaming it on 'her slipping on a carpet', dismissed by the testimony of a doctor who explained that the injuries could not have been caused in the way described by Boycott.
Sacked by the BBC, Sky and The Sun, he went to work in India as he was toxic in the UK and has remained so which makes it even more unbelievable that Theresa May would even contemplate knighting him.
The shadow minister for women and equalities, quite rightly said: 'Celebrating a man convicted of assaulting his partner by giving him a knighthood is an insult to victims and survivors of domestic violence'.
If he has anything about him he would have refused to accept it but instead he said that he: 'didn't give a toss what people thought' which shows everything about the deplorable, coward of a man.
Posted by Falling on a bruise at 22:50